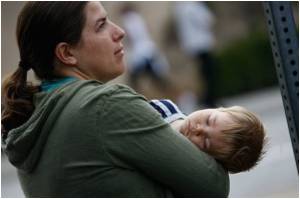 Financially-deprived mothers who struggle provide food for their families likely to put themselves at risk for obesity while trying to feed their kids, according to sociologists.

Such mothers are more likely to be obese or overweight than fathers who face food shortages, as well as food-insecure, childless women and men, said Molly Martin, assistant professor of sociology and demography.

Over time, these mothers also gain more weight compared to all food-insecure men and food-insecure women not caring for children.


"We often forget that food insecurity is happening in a country as rich as ours," said Martin.

"Trying to protect children from food insecurity is not as rare as it once was, and it's been on the rise for the last two years, if not the last five years," she said.
Advertisement
Mothers, who are often the food managers in the household, may take several actions to ensure that their children are fed, including skipping meals and eating cheaper, but less nutritious foods.

"To make sure mothers can provide for their children, they may eat only once a day, for example, or they may eat erratically, which are all behaviors that are obesity risks," said Adam Lippert, graduate student in sociology, who worked with Martin.

Irregular eating can also cause a metabolic response that retains fat, say researchers.

They examined data on 7,931 participants in the Panel Study of Income Dynamics. The biennial study, which has collected information on health and income levels of Americans since 1968, began collecting data on weight and food insecurity in 1999.

"What this study suggests is that the relative safety net could be improved.

"While food pantries and food stamps shore up family needs, a lot of families are still struggling to meet basic nutritional needs - vitamins, minerals and key nutrient," she said.

The findings were reported in the current issue of Social Science and Medicine.

Home Remedies for Obesity
Home remedies offer you a simple and natural method to treat obesity. Follow these simple home ......