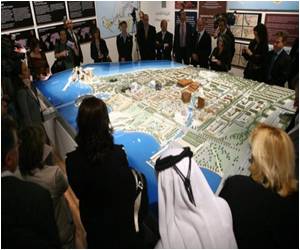 Ranging from paintings by Picasso and Mondrian to Islamic miniatures, the Louvre Abu Dhabi gallery unveiled more than 130 artworks from the museum's first permanent collection.

"In this exhibition, we have the chance to demonstrate the universal aspect by putting in parallel sculptures or paintings from different civilisations from a similar period of time," senior project manager Celine Hullo Pouyat.

Ancient sections of the holy Muslim book, the Koran, stand alongside a 16th century statue of "Christ Showing His Wounds" and a Torah at the exhibition which will open to the public on April 22.


"There are no red lines in this exhibition," said Olivier Gabet, deputy head of the curatorial department in charge of decorative arts at the Agence France-Museums.
Advertisement
Among the famous pieces is Picasso's "Portrait of a Lady", Edouard Manet's "The Gypsy" and works by Paul Gauguin, Rene Magritte, Cy Twombly and Paul Klee.

Oil-rich Gulf emirate Abu Dhabi has paid around $1.3 billion to use the Louvre name for 30 years and to tap the renowned Paris museum for artworks and expertise during this period.

The deal stirred a debate in the French art world, with critics saying the Louvre is selling its soul as they questioned Abu Dhabi's treatment of dissidents and immigrant workers employed in the construction of the project.

Abu Dhabi has launched an ambitious development plan, Abu Dhabi 2030, aimed at modernising the emirate and diversifying its economy.

Despite the global financial crisis and its severe impact on neighbouring Dubai, construction has continued in Abu Dhabi, although at a much slower pace than planned.

The opening of the Louvre Abu Dhabi was delayed by three years.

New Boss Appointed for France's Louvre Museum
Jean-Luc Martinez, an expert in Greek sculpture was named as the new boss of the famed Louvre ......

Louvre in Paris: The Most Visited Art Museum
According to the Art Newspaper, the Louvre in Paris has got the top spot of the most visited art ......

Louvre and Nintendo Team Up in Digital Drive to Make Art a Simple Thing
In order to guide visitors through its vast art collections, the Louvre has teamed up with Nintendo ...