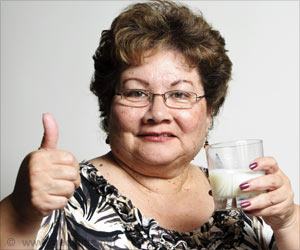 The number of obese people is rising steadily worldwide. Scientists are looking for ways to fight this global obesity epidemic. They have now have programmed bacteria to generate a anti-obesity molecule in the gut. Animal studies revealed that mice who drank water laced with the programmed bacteria ate less, had lower body fat and stayed off diabetes, even when fed a high-fat diet, offering a potential weight-loss strategy for humans.

A molecule in the small intestine, known as N-acyl-phosphatidylethanolamines (NAPEs), that is produced after a meal is quickly converted into N-acyl-ethanolamines (NAEs), potent appetite-suppressing lipids. Researchers at Vanderbilt University altered the genes of a strain of probiotic bacteria so that it would make NAPEs. They then added the bacteria to the drinking water of a strain of mice that, fed a high-fat diet, develop obesity, signs of diabetes and fatty livers.

Compared to mice who received plain water with non-programmed bacteria, the mice drinking the NAPE-making bacteria gained 15% less weight over the eight weeks of treatment. In addition, their livers and glucose metabolism were better than in the control group. The mice that received the therapeutic bacteria remained lighter and leaner than control mice for up to twelve weeks after treatment ended.


Sean Davies, Ph.D said, "The microbial medicine would be low maintenance, and the goal was to produce therapeutic bacteria that live in the gut for six months or a year, providing sustained drug delivery. This is in contrast to weight-loss drugs that typically need to be taken at least daily, and people tend not to take their medications as directed over time. So we need strategies that deliver the drug without requiring the patient to remember to take their pills every few hours."

The study will be presented at the 249th National Meeting and Exposition of the American Chemical Society (ACS).

Source: Medindia
Advertisement
<< Acute Kidney Injury Can Now Be Repaired by a Protein inside ...
Do You Want Your Kids to Eat More Veggies? Make it Tasty, sa... >>

Weight Loss with Hypnosis  Does It Work?
Hypnosis indirectly helps with weight loss by altering the consciousness through suggestions and ima...