Looted Khmer Statues by US Returned to Cambodia 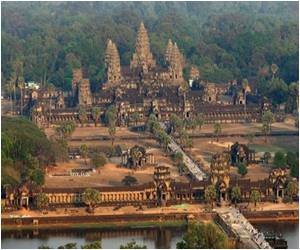 Three ancient statues that were looted from kingdom of Cambodia more than 40 years ago, including one retrieved after a long legal battle in the United States, were returned on Tuesday to Cambodia, as the kingdom welcomed them.

Authorities say the 10th-century sandstone artworks were stolen in the 1970s as the country was gripped by civil war, from the Koh Ker temple site near the famed Angkor Wat complex.

Royal oxen in Cambodia feasted on beans, sesame, corn, and rice at an ancient ritual that led to astrologers predicting a quite good harvest this year.
Advertisement

The statues, part of a nine-strong ensemble, depict warriors "Duryodhana" and "Bhima" locked in combat -- as well as a bystander called "Balarama".


They were recently returned from the US and are considered pieces of extraordinary value to the Cambodian people and part of their cultural heritage.

A two-year-old girl from Cambodia has died from bird flu, becoming the country's fourth confirmed fatality - all children - from the deadly virus this year, health authorities said.
Advertisement
"In a long 40-year journey, surviving civil wars, looting, smuggling and travelling the world, these three (statues) have now regained their freedom and returned home," Deputy Prime Minister Sok An said in remarks during a homecoming ceremony.

"The facts are now established. Their odyssey ends here. These precious symbols of our heritage have returned to their rightful owners," he said.

Sok An said Cambodia would continue to search for three more statues from the Koh Ker site that remain missing.

The statue of Duryodhana was stolen in 1972 and first sold at auction in London in 1975.

It was nearly auctioned again at Sotheby's in New York in March 2011 but the sale was stopped after Cambodian authorities launched an appeal through UNESCO.

The 1.58 metre (five foot) statue was eventually transferred to the Cambodian government in early May after a long legal struggle.

The second warrior statue, Bhima, was bought in 1976 by the Norton Simon Museum in California.

After months of discussions, the US museum agreed to return its statue as a "gift" to Cambodia last month.

"These are beautiful works of art... they also have something to say. They tell a story," said Martin Wilson, a representative from Christie's who attended Tuesday's ceremony.

The repatriation of the three statues follows the return in June last year of two other Khmer 10th century statues known as the "Kneeling Attendants" which Cambodia says were also looted in the 1970s from the Koh Ker temple site.

They were on show for 20 years at New York's Metropolitan Museum of Art.

To catch a glimpse of the small statue of Virgin Mary that glows in the dark, hundreds of people have been gathering to a house in southern Belgium
Advertisement
<< Death Toll of MERS Surges to 282 in Saudi
Outbreak of Cholera in South Sudan >>