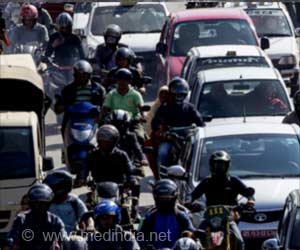 The risk of asthma increases with long-term exposure to traffic and outdoor air pollution, suggests a new study published in the European Respiratory Journal.

The study strengthens the evidence on the link between long-term exposure to outdoor pollution and asthma in adults.

Advertisement
‘Long-term exposure to air pollution and traffic can lead to asthma. A high concentration of 8-iso (exhaled in the breath and considered to be a biological marker of damaged tissue in the lungs) may cause increased production of mucus and contraction of the airway muscles leading to asthma.’

It also offers new insights into what the underlying mechanisms are, by examining the concentration of 8-isoprostane (8-iso), which is exhaled in the breath and believed to be a biological marker of tissue damage in the lungs.


Anaïs Havet, lead researcher from the French Institute of Health and Medical Research at Inserm, France, said: "It is very well known that short-term exposure to air pollution is associated with increased asthma symptoms, hospitalisations and use of asthma medication, but studies on the associations between long-term exposure to outdoor air pollution and asthma among adults are still scarce.
Advertisement
"We wanted to try and better understand the underlying biological mechanisms associated with outdoor air pollution and increased asthma symptoms, asthma attacks or medication use, as up to now they were largely unknown."

Using French cohort data from 608 adults, including 240 with asthma who had respiratory symptoms, asthma attacks or increased medication use in the previous 12 months, the research team estimated the impact of long-term exposure to high-intensity traffic and different types of outdoor air pollutants called ozone and particulate matter.

They also studied the associations between long-term exposure to outdoor air pollution, exhaled 8-iso, and current asthma. A high concentration of 8-iso is thought to increase airway responsiveness, and can increase the production of mucus and cause contraction of the airway muscles, making it difficult to breathe.

The concentration of 8-iso was measured using a non-invasive test on the exhaled breath of participants. Data on the levels of road traffic and air pollution were taken from the European Study of Cohorts for Air Pollution Effects and French Institute for the Environment assessments.

The team of researchers took account of other factors that can affect asthma including age, sex, smoking habits, body mass index, socio-economic class and exposure to cleaning chemicals.

Among participants without asthma, exhaled 8-iso concentration significantly increased due to exposure to particulate matter.

"Based on this, we think that 8-iso is a marker related to one of the underlying biological mechanisms by which outdoor air pollution increases the risk of experiencing asthma symptoms, asthma attacks or the need for the use of asthma medications."

The research team said that although air pollution levels in Western Europe are relatively low when compared to cities in Asia or Latin-America, study participants were still exposed to pollution levels that exceed the values recommended by the World Health Organization.

Havet added: "Our research reinforces the fact that air pollution levels found in Europe are still too high to preserve lung health, and the impact on health is likely to be even greater in other parts of the world with higher levels of pollution.

"Efforts should be made to limit air pollution emissions, with more emphasis on moving towards cleaner cities with fewer cars and more efficient public transport."

The research team noted that this study only looked at air pollution exposure at the participants' home address and did not have data on their exposure at other locations, and say that larger longitudinal studies are now needed to confirm their results.

Long-term Kidney Diseases can be a result of Air Pollution
Air pollution can be directly responsible for long term kidney diseases, increasing levels of dust ....

Impact of Traffic-related Air Pollution on Childhood Asthma
Newly developed model can assess the impact air pollution has on the development of childhood ......