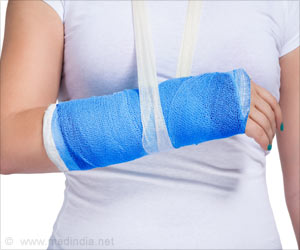 A new study published online ahead of print in the American Journal of Respiratory and Critical Care Medicine reveals that after being hospitalized in intensive care for one year, patients reduce bone mass that puts them at greater risk for fractures.

Neil R. Orford, MBBS, director of the ICU at the University Hospital Geelong in Australia, and colleagues found that patients who spent at least 24 hours on a breathing machine in an intensive care unit had 1.59 percent less bone mineral density (BMD) in their lower spines and 1.2 percent less BMD in their thigh bone than expected one year after being hospitalized. The bone losses were statistically significant in the overall study population and in just women. In men, only the BMD decline in the thigh bone was significant.

Doctors and patients need to better understand the relationship between diabetes, certain drugs, and the often dramatic effect on bone health and fractures.
Advertisement
‘Patients reduce bone mass if they are being hospitalized in intensive care for one year, that puts them at greater risk for fractures.’

The loss of bone density, along with other clinical risk factors assessed by a World Health Organization algorithm, increased their chances of suffering a fragility fracture according to the researchers. The researchers also looked at the biochemical changes occurring in the patients that might affect bone density.

Selective serotonin reuptake inhibitors, a class of anti-depressants alters bone turnover, shifting the balance in favor of bone thinning than strengthening.
Advertisement
Their study suggests that critical illness accelerates bone resorption, the process by which the body breaks down bone and releases calcium and other minerals into the bloodstream. A year later, the researchers found that resorption had normalized, but patients were left with a bone-mass deficit.

"Our study demonstrates a need to investigate the role anti-resorptive therapies to prevent bone loss in critically ill patients during their time in the hospital and afterwards during recovery," Dr. Orford said.

The authors wrote that follow-up studies should investigate drugs already being used to treat osteoporosis and other treatments, including physical therapy, to see if bone loss can be prevented in critically ill patients.

The Geelong study included 66 patients, average age 68.8 years, who underwent BMD testing after leaving the ICU and then again a year later. The authors believe theirs in the first study to look at the long-term effect of ICU treatment on bone density. The patients were matched and compared to patients from the Geelong Osteoporosis Study, a large random population-based sample used to determine normal ranges of BMD over time.

The authors said the relatively small number of participants limits the generalizability of the findings to other ICU patients and prevents them from identifying additional bone-loss risk factors. Because the study only looked at ICU patients, the authors said they cannot rule out the possibility that other hospitalized patients would experience similar bone losses.

"The impact of accelerated bone loss observed in the year after critical illness is dependent on previous bone health and likely to be of more significance in post-menopausal women," Orford said. "Investigations of anti-resorptive drugs in larger, multi-center trials, however, are needed before treatment recommendations can be made."

A drug that mimics calcium and lowers parathyroid levels may help prevent bone fractures in patients with kidney failure who are on dialysis, according to a new study.

Scaphoid Fracture of The Wrist