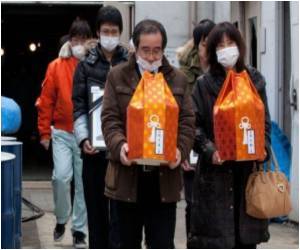 A lone pine tree stands on the shore of a tsunami-wrecked Japanese city, a symbol of hope and defiance for people who have lost everything.

The tree was one of 70,000 in a forest that had protected the city of Rikuzentakata from ocean winds for more than 300 years.

The EU may move to strengthen controls on imports of Japanese food to include checks on the presence of plutonium.
Advertisement

Large parts of the city now lie in ruins, with only the shells of a few concrete buildings left standing. Ten percent of the city's population is dead or missing.


The forest of black and red pine trees is also gone, scattered like matchsticks across this once-pretty resort by the enormous power of the March 11 tsunami -- except for this single tree, whose survival is counted as a "miracle" by those whose homes have now vanished.

Farmers are facing the bitter aftermath of Japan's nuclear emergency, which could see crops left to rot over a vast swathe of the country's agricultural heartland.
Advertisement
"Since it was the only tree left intact, it will become a symbol of restoration," said 23-year-old Eri Kamaishi, as she stood in the shadow of the tree now known locally as the "pine of hope".

The tree is one of the few landmarks left to show where Rikuzentakata once stood, said Kamaishi.

"I can't even remember exactly what the city looked like because it has so completely gone," she said.

Resin oozes from a scar on the trunk of the tree, where the lower branches were ripped off by the power of the waves, but a thick spray of green pine needles at the top of the 10-metre (33-foot) tree shows it is very much still alive.

Japanese Prime Minister Naoto Kan chose Rikuzentakata as his first place to set foot in the tsunami-ravaged disaster zone on a visit Saturday.

"There used to be a great pine forest here," Kan said as he inspected the devastated bay area where the lone pine tree stands. "But they were uprooted. They have vanished."

Hiroko Kikuta, 62, said earlier that the golden sands of the city's beach were crowded in summer months with holidaymakers and locals.

"Now everything has gone except for the tree," she said. "The pine is tall and strong."

"I want to see the beautiful beach and great pine trees again like they used to be," said Kikuta, whose husband is still missing.

The history of the pine forest can be traced back to the 17th century, when a wealthy merchant began planting trees as a windbreaker to protect residents from storms.

The beach, which sits at the mouth of a bay, drew around 200,000 visitors a year and was listed in guide books as one of the 100 most scenic places in Japan.

"For us, the pine trees are very special" because of the protection they offered to local people, said Yasuo Murakami, 69.

He said he hoped the tree would encourage survivors and heal the broken hearts of those who have lost their loved ones. Murakami's wife and sister were found dead and his six-year-old grandchild is still missing.

Rikuzentakata, 400 kilometres (250 miles) north of Tokyo, is staggering under the weight of the destruction wreaked by the tsunami.

Around 1,000 people are known to have died, with 1,300 still missing. Many thousands are living in evacuation centres. Heaps of debris across a vast area of the city remain almost untouched.

Nationwide, the death toll from the 9.0 magnitude quake and the tsunami that followed it has exceeded 11,000, with more than 16,000 people unaccounted for.

Tomohiro Owada, a spokesman for the city hall, said he had watched as the tsunami crushed the pine forest.

"But this tree has survived. It's a miracle," Owada said. "Once we finish rescue operations and have established proper support for victims, we will look at how we can preserve it as a symbol of our reconstruction."

Hundreds of family pets are struggling to survive in the desolation of Japan's tsunami-ravaged northeast coast even as their owners are either lost or dead.
Advertisement
<< Placing Value, Price on New Drugs: The Challenge Facing New...
A National Survey on the Value of Otolaryngologists' Servic... >>

Sanatogen Loram (2 mg) (Lorazepam) Find a Doctor Selfie Addiction Calculator Pregnancy Confirmation Calculator Color Blindness Calculator How to Reduce School Bag Weight - Simple Tips Noscaphene (Noscapine) Nutam (400mg) (Piracetam) Drug Side Effects Calculator
This site uses cookies to deliver our services.By using our site, you acknowledge that you have read and understand our Cookie Policy, Privacy Policy, and our Terms of Use  Ok, Got it. Close
×