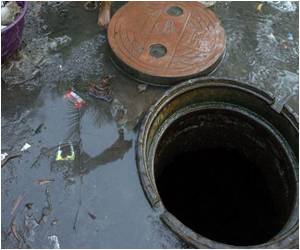 The sewer technicians of London are fighting a grim war against giant 'fatbergs' everyday beneath the streets of London. The 'fatbergs' are known to clog the system and regurgitate putrid waste back into people's homes.

The problem gets worse at Christmas, when two extra Olympic-sized swimming pools of turkey fat are poured down Londoners' sinks.

Most residents are unaware that their actions help create fatbergs -- the nickname for stinking boulders of cooking fat, congealed with everything from wet wipes to sanitary towels and condoms, which block the sewers a few metres below their dining tables.


The problem of congealed fat clogging up Thames Water's 43,500 miles (69,000 kilometres) of sewers in London and southeast England is getting worse.
Advertisement
But in the heart of central London, a few hundred metres from Downing Street and Trafalgar Square, the fatberg fightback is on.

The sewers -- a confined, pitch-black underworld crawling with flies and worms where staff walk through a deep seam of rotting fat and excrement -- are many people's idea of hell.

But this is where Vince Minney, a supervisor from the Thames Water authority, has made his living for the past 24 years.

Wearing waders and a white protective suit, Minney, 54, climbs into a tiny manhole in the road and descends seven metres on a fixed ladder into the putrid bowels of the city.

"The fat situation is definitely getting worse. It's building up in certain sewers it never did before," he told AFP, standing waist-deep in rancid gunk where the Regent Street and Victoria sewers merge.

The flow of human waste in the sewers is not the problem, he said -- it's the heavy "blanket" of congealed fat stuck on top.

"It's about the nastiest stuff you can get. The diarrhoea stuff is a pleasure compared to this," he added, tapping a spade on the thick fat layer engulfing his thighs.

Minney and his team break up the fatbergs using spades or high-pressure water jets.

Fungi grow on the crust, which looks like solidified vomit. Walking through it leaves a wake like an icebreaker ship.

Each spade chop unleashes the effluent beneath, releasing the revolting stench of hydrogen sulfide which can cling to a worker's body for up to two weeks.

"It's very, very sickly. It just smells awful," added Tim Henderson, 39, a "flusher" or trunk sewer technician of seven years' experience. "Like a cross between a sweaty, cheesy-type smell, mixed with sewage."

Getting splashed with anything in the sewers is no fun, either.

"It's not nice in your face," said Minney. "I've had some good splatterings before. Sometimes the flies go in your mouth. Spit 'em out quick," he chuckled.

City beneath a city -

A good sense of humour and plenty of dedication is required to work in the sewers, which date back to the 1860s.

Like taxi drivers who take years to learn "The Knowledge", covering the location of every street in central London, getting to know their layout requires devotion.

"It is unique being able to go down certain parts of London that other people don't get to see," said Henderson.

"There's a London underneath London. It's a real feat of engineering. Some of the sewers are really beautiful. The brickwork is just amazing."

The congealed fat, whether sucked out by technicians or broken up and flushed downstream to a treatment works, ends up in landfill.

Thames Water says it sees some 80,000 fatberg blockages per year which cost £1 million ($1.6 million, 1.3 million euros) a month to clear. Some 7,000 of their customers experience sewer flooding in their homes as a result.

"It'd be great if the public and businesses were to help. We could be spending that money on better things," said Minney, urging people to stop pouring cooking oil down their sinks.

"People think it's out of sight, out of mind. But some poor folks are having to deal with it. And it's going to get worse at Christmas," he added.

The Panel On Gays Cancelled By Turkey University, calling it "Immoral"
A panel on gay rights was cancelled by a Turkish university, after it came under harsh criticism ......

The Magic of Christmas
The festival of Christmas represents values such as sharing, loving and empathizing and involves ......