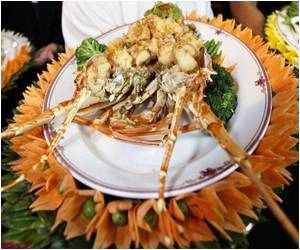 Recession hit Britons are turning to lobsters instead of turkeys this Christmas , say experts.

Bosses consider that it will be second only to the traditional Yuletide bird in the year's food and drink best-sellers.

A lovely thing about Christmas is that it's compulsory, like a thunderstorm, and we all go through it together. - (Garrison Keillor) - a Christmas special report from Medindia.
Advertisement

Experts say recession-hit Brits are turning to luxury foods as a treat to cheer themselves up.


One of Britain's largest chain of supermarkets, Sainsbury's is offering a dressed lobster with king prawns for a wallet-busting 19 pounds for a two-person starter.

Lobsters may Hold Cure for Paralysis

A new treatment based on the shells of sea creatures like lobsters may offer fresh hope to paralyzed and brain-damaged patients.
Advertisement
"Our customers said they at Christmas and lobster was seen as a luxury," the Daily Star quoted a company spokeswoman as saying.

Marks and Spencer is also selling the gourmet meal with a freshly cooked whole lobster priced at 15.99 pounds.

Figures have revealed that Brits are forking out almost 20 percent more for their Christmas meals this year, compared to 2010.

Not a 'Turkey Dinner' but Dinner for Turkeys!

Eliot is a handsome and a very lucky turkey too, considering he's been served dinner at Thanksgiving.
Advertisement
<< Planting Improves Stress Levels: Study
US Court Battle Gets Bigger Over Morning-after Pill >>

Turmeric Powder - Health Benefits, Uses & Side Effects Iron Intake Calculator Noscaphene (Noscapine) Vent Forte (Theophylline) Drug - Food Interactions Color Blindness Calculator Post-Nasal Drip Hearing Loss Calculator The Essence of Yoga Find a Hospital
This site uses cookies to deliver our services. By using our site, you acknowledge that you have read and understand our Cookie Policy, Privacy Policy, and our Terms of Use