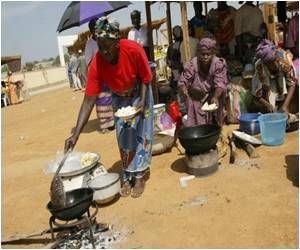 Aimed to avert deaths caused by toxic smoke from rudimentary cookstoves, which is among the developing world's worst public health threats, a UN-linked body initiated a campaign in Nigeria on Tuesday.

Some two million people die annually from diseases caused by toxic cookstove smoke, according to the Global Alliance for Clean Cookstoves, a UN Foundation-led initiative seeking to reverse the trend.

In Nigeria, Africa's most populous nation, an estimated 95,000 people die each year due to such toxic smoke, the highest number of deaths on the continent.


Radha Muthiah, executive director of the Global Alliance, said the risk posed by rudimentary forms of cooking should be accorded similar attention as diseases such as malaria, HIV/AIDS and tuberculosis.
Advertisement
"We feel the time is right and the time is indeed now with the launch of the Nigerian Alliance as well to arrest this silent killer in homes of half of the world population," she said at Tuesday's launch.

Muthiah said some three billion people globally are dependent on solid fuels for cooking, such as burning wood or charcoal indoors, a practice that also depletes forests, which scientists say can contribute to climate change.

US Ambassador to Nigeria Terence McCulley said his government has committed up to $105 million over the next five years for the project, which aims to create markets for cleaner burning stoves.

The Coordinator of the Nigerian Alliance for Clean Cookstoves, Ewah Eleri, said the target is to see Nigeria equipped with 10 million clean cookstoves by 2020, beginning with half a million within the next 12 months.

Is Bad Air More Dangerous Than Cocaine?
Air pollution triggers more heart attacks than most other risk factors, suggests study. It poses as ...