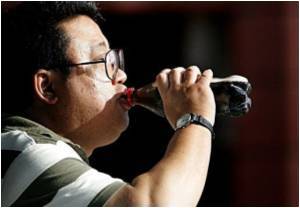 In a new study, scientists found that men who drank a 12-ounce sugary beverage a day had a 20 percent higher risk of heart disease compared to men who didn't take any such drinks.

"This study adds to the growing evidence that sugary beverages are detrimental to cardiovascular health," said Frank B Hu, MD, PhD, study lead author and professor of nutrition and epidemiology in the Harvard School of Public Health in Boston, Massachusetts.


"Certainly, it provides strong justification for reducing sugary beverage consumption among patients, and more importantly, in the general population," he added.

Heart disease is a major killer worldwide in spite of major strides in the medical field in terms of research, diagnosis, treatment and pharmacology. HIV/AIDS and Alzheimer's disease are vying for popular attention these days and people tend to sideline or neglect healthy heart awareness. Take our quiz and refresh your awareness on heart disease.
Advertisement
Vasanti S Malik, Sc D, is also one of the co-authors.

Researchers studied 42,883 men in the Health Professionals Follow-Up Study and found that the increase persisted even after controlling for other risk factors, including smoking, physical inactivity, alcohol use and family history of heart disease. Less frequent consumption - twice weekly and twice monthly - didn't increase risk.

Compared to non-drinkers, those who consumed sugary beverages daily had higher triglyceride and CRP and lower HDL levels.

Artificially sweetened beverages were not linked to increased risk or biomarkers for heart disease in this study.

Beginning in January 1986 and every two years until December 2008, participants answered questionnaires about diet and other health habits. They also provided a blood sample midway through the survey. Follow-up was 22 years.

Participants were primarily Caucasian men 40-75 years old. All were employed in a health-related profession.

Health habits of the men in the study may differ from those of the general public, but findings in women from the 2009 Nurses' Health Study were comparable, Hu said.

The study was published in Circulation, an American Heart Association journal.

US nutrition experts have called for new class of low-sugar drinks to help stem obesity and diabetes epidemics.
Advertisement
Advertisement

Heart disease can be of many types depending upon whether they involve the heart muscles or artery walls or ...
This site uses cookies to deliver our services.By using our site, you acknowledge that you have read and understand our Cookie Policy, Privacy Policy, and our Terms of Use  Ok, Got it. Close
×