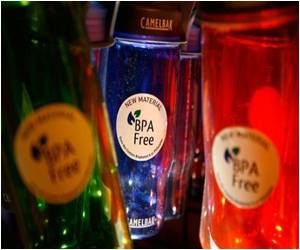 For the first time, US scientists have spotted an association between overweight and obese children and a common chemical found in everyday consumer products.

The substance is Bisphenol A (BPA), a manufactured chemical, and the study found that in a sample of nearly 3,000 children and adolescents, those with a higher concentration of BPA had significantly increased odds of being obese.

However, an industry group immediately complained that no causality was shown in the study, which was led by Dr Leonardo Trasande of the NYU School of Medicine, and said the researchers themselves had acknowledged this.


The study, published in the Journal of the American Medical Association, said that of four groups of children, around 22 percent of those with the highest level of BPA in their urine were obese, compared to 10 percent among those with the lowest level of the chemical.

"We are indeed much more than what we eat, but what we eat can nevertheless help us to be much more than what we are". - Adelle Davis There are thousands out there battling 'the bulge'. With childhood obesity on the rise even children are not spared. If your weight issues are threatening to weigh you down learn more about obesity by taking part in this quiz.
Advertisement
"To our knowledge, this is the first report of an association of an environmental chemical exposure with childhood obesity in a nationally representative sample," the study authors said.

The American Chemistry Council though, dismissed the study as having "fundamental limitations," and labeled it a "distraction from the real efforts under way to address this important national health issue."

"Due to inherent, fundamental limitations in this study, it is incapable of establishing any meaningful connection between BPA and obesity," the council said in a statement.

The industry group also noted that the study's authors acknowledged obesity was a condition that takes time to develop, and said it was inappropriate to link BPA exposure to obesity among people that already suffered from it.

Obesity is resistant to instant remedies and its management is a long-term endeavor. Here are a few tips to control obesity in children.
Advertisement
<< No Scientific Proof That Mobile Phones Increase Cancer Risk:...
Exercise Cuts Kids' Diabetes Risk >>