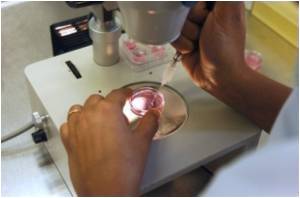 According to a recent study, mammalian cells divide not when the cells reach a critical size, but when the growth rate hits a specific threshold. The results of the study have been published in the journal Nature Methods.

This first-ever observation of this threshold was made possible by a technique developed by MIT professor Scott Manalis and his students in 2007 to measure the mass of single cells. In the new study, Manalis and his colleagues were able to track cell growth and relate it to the timing of cell division by measuring cells' mass every 60 seconds throughout their lifespans.

The finding offers a possible explanation for how cells determine when to start dividing, says Sungmin Son, a grad student in Manalis' lab and lead author of the paper. "It's easier for cells to measure their growth rate, because they can do that by measuring how fast something in the cell is produced or degraded, whereas measuring size precisely is hard for cells," Son says.


Manalis, a professor of biological engineering and member of the David H. Koch Institute for Integrative Cancer Research at MIT, is senior author of the paper. Other authors are former MIT grad student Yaochung Weng; Amit Tzur, a former research fellow at HMS; Paul Jorgensen, a former HMS postdoc; Jisoo Kim, a former undergraduate student at MIT; and Marc Kirschner, a professor of systems biology at HMS.

Manalis' original cell-weighing system, known as a suspended microchannel resonator, pumps cells (in fluid) through a microchannel that runs across a tiny silicon cantilever. That cantilever vibrates within a vacuum. When a cell flows through the channel, the frequency of the cantilever's vibration changes, and the cell's buoyant mass can be calculated from that change in frequency.

For the new study, the researchers redesigned their system so that they could trap cells over a much longer period of time. The original system offered limited control over the motion of cells in the channel; cells could be lost or become unviable due to accrued shear stress from frequent passages through the microchannel. Consequently, growth could be monitored for less than 30 minutes.

To avoid this problem, the researchers developed a way to precisely control the flow in the system so that a cell could be stopped anywhere in the bypass channel. They also configured the flow to constantly replenish nutrients and remove waste. Now a cell passes through only every 60 seconds and remains viable for several generations.

The new system also measures fluorescent signals from a cell in addition to its mass. Cells are programmed to express fluorescent proteins at various points in the cell cycle, allowing the researchers to link cell cycle information to growth.

A cell devotes itself to growth in a phase called G1. A critical transition occurs when the cell enters the S phase, during which DNA is replicated in preparation for division. The researchers found that growth rate increases rapidly during the G1 phase. This rate varies a great deal from cell to cell during G1, but converges as cells approach the S phase. Once cells complete the transition into S phase, growth rates diverge again.

Building on the feature of the new system that precisely controls the environmental conditions inside the channel, researchers can also change the conditions very rapidly, allowing them to monitor how cells respond to such disturbances.

"We are now measuring the cell's response on short timescales to various perturbations, such as depleting a particular nutrient or adding a drug," Manalis says. "We believe this could offer new types of information that could not be obtained from conventional proliferation assays." 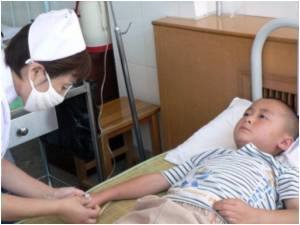 Low Birth Weight May Hamper Growth Rate In Kids With Kidney Disease
A new study has shown that the lower the birth weight, the greater are the chances of poor growth rate in children with chronic kidney disease (CKD).
READ MORE

Tumor Microenvironment Activates Immune Cells in Section of Metastatic Melanoma Patients
A new study reveals that the immune cells that infiltrate metastatic melanoma are activated by the microenvironment of the tumor cells.
READ MORE