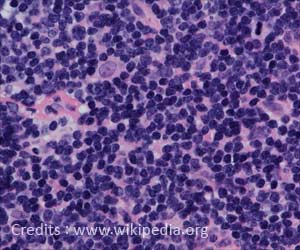 Selection criteria yielded 90 patients, 23 patients living with HIV and 67 immunocompetent patients. In patients with available Ki-67 expression data, nADCmean, nADC15 and nADC75 inversely correlated with Ki-67 expression. For PLWH, there was no correlation between ADC parameters and Ki-67 expression or clinical outcomes.

For lymphoma treatment, the addition of molecule Sialyl-Lewis X to natural killer cells delays the growth of lymphomas.
Advertisement
‘New study concluded that the role of MR in PCNSL has been the detection and qualitative evaluation of response to treatment.’
Read More..

ADC histogram analysis can predict tumor proliferation and survival in immunocompetent patients with PCNSL, but with limited utility in PLWH.

In a recent similar study of whole tumor histogram analysis in PCNSL performed by the authors of this study, multiple ADC parameters were inversely correlated with Ki-67 expression and associated with poorer OS.

However, tumor segmentation was performed using only the ADC sequence with the potential inclusion of intra-tumoral necrosis, hemorrhage or regions outside of the actual solid tumor that would otherwise have been excluded with contrast co-registration, ultimately providing a suboptimal representation of true tumor parenchyma.

The primary aim of this study is to more comprehensively evaluate the relationship between ADC calculations with tumor Ki-67 expression and clinical outcomes using a larger patient sample with the inclusion of PLWH and whole tumor segmentation with T1 post contrast co-registration.

The Oncotarget author's hypothesis is that ADC values will inversely correlate with Ki-67 expression and that tumors with higher ADC values above the median will have improved OS and PFS.

The Khan Research Team concluded in their Oncotarget Research Paper that the role of MR in PCNSL historically has been the detection and qualitative evaluation of response to treatment.

DWI and derived ADC maps have been a well-established tool in neuroimaging, but the use of ADC histogram profiling has not been widely accepted in daily practice.

The role of using ADC as an imaging biomarker in PLWH may be limited. Quantitative ADC histogram analysis should be strongly considered as part of the imaging protocol in the evaluation of immunocompetent patients with PCNSL.