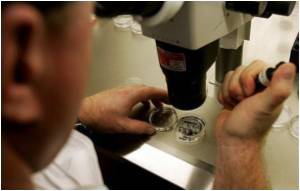 Europe's restrictive reproduction laws cause many Croatian couples to find solution to their fertility problems abroad.

"It is really hard and sad that someone can limit your instinctive wish for a child," says Ksenija Puskaric, 31, referring to the law on medically assisted reproduction that sparked outrage when it was adopted a year ago.


After undergoing two unsuccessful in vitro fertilisation (IVF) treatments in Croatia, Puskaric and her husband have been forced to seek medical help in neighbouring Slovenia to realise their dream of a family.


Croatia's law, slammed by rights groups, bans the freezing of embryos and allows fertilisation of only three eggs per attempt.

The remaining eggs harvested during the procedure are frozen for later use, but couples say this drastically reduces their chances of a positive outcome.

"I have no need to enter a Croatian clinic any more," said Puskaric, a journalist.

"I simply don't want to put my health at risk due to some experimental procedure that someone is pushing as a standard, which it is certainly not," she said.

Until the new law came into force, Croatia was still working under old rules on IVF adopted in 1978 when it was part of the now-defunct Yugoslavia and when the world's first "test-tube baby" was born.

Because the law had become so outdated, it did not cover new technologies -- such as embryo freezing -- which clinics in Croatia took to utilising freely.

Proposed reforms had circulated since the late 1990s, but they did not reach parliament because of strong opposition from the Catholic Church, a powerful voice in Croatian society.

The law that was finally passed in 2009 is seen as the ruling conservatives' concession to the Church, which holds that the life starts at the moment of conception.

"An embryo is a living being so we are not allowing embryo-freezing," Health Minister Darko Milinovic has said.

"This is restrictive since it does not provide a possibility for treatment that couples should have according to medical standards," says Karmen Rivoseki-Simic of the RODA parents' rights group.

No other country in Europe limits fertilisation to three eggs, since there is no way to determine which eggs have the best potential, nor do they completely ban the freezing of embryos, she said.

Egg-freezing, more sophisticated than embryo-freezing, is generally used for women with cancer who want to preserve their fertility before undergoing cancer treatment.

The European Society of Human Reproduction and Embryology (ESHRE) says that at this stage egg-freezing should be regarded as experimental.

The Croatian law was slightly amended in October mainly to make the treatment easier for non-married couples, but the main controversial stipulations have remained.

Last month a national association of reproductive health specialists adopted a proposal to change the law to enable freezing of embryos and fertilisation of more than three eggs in particular cases, accounting for about 15 percent of the overall number.

"The Church had an unacceptable influence here, and the law is actually violating human rights," Mirjana Krizmanic, a social psychologist, told AFP.

"The right to parenthood is one of the basic human rights and if it has to be achieved with medical help it should be done in the best possible way," she adds.

The first statistics over the impact of the law, released in May, have also caused debate.

While the government and doctors have claimed that theb number of pregnancies increased by some 20 percent since the law was introduced, RODA has argued that their number had actually decreased by 12 percent.

"I am a very good example of why the law is bad," says a 26-year-old woman, who gave only her first name, Jelena.

During Jelena's first unsuccessful IVF treatment in a Zagreb hospital three eggs were fertilised and five had to be frozen -- in accordance with the law.

In the second attempt, only three eggs survived thawing but none got fertilised as they were damaged during the process.

Jelena, an economist, says she too plans to go to a Slovenian clinic where she will have to pay some 3,000 euros (3,700 dollars) for the treatment and drugs.

Parents groups and couples regret that doctors have been generally silent over the issue and criticise Prime Minister Jadranka Kosor, a mother herself, for backing such a restrictive regulation.

"My husband was so outraged that we are even thinking about going to live abroad," says Puskaric.