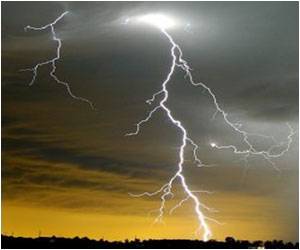 The unnamed boy was struck at Lowestoft Seafront Air Festival, and it was only when the ambulance team was treating him that they noticed the time - 1.13pm.

Burn injuries have reached epidemic proportions in recent years. Burn accident statistics show that at least 50% of all burn accidents can be prevented.
Advertisement

He has suffered a minor burn and was taken to James Paget Hospital, where he is expected recover soon.


"There'd been very heavy rain all day, but this afternoon we saw a big flash of lightning over the sea and a loud clap of thunder," The Daily Mail quoted Rex Clarke, who leads the team of St John Ambulance volunteers at the event, as saying.

Pang Nop was pedalling his bicycle home through a light drizzle when he paused to pick up some stones for his slingshot.
Advertisement
"We got a call that someone had been struck by lightning so we immediately sent our paramedics to the scene, followed by an ambulance. Lightning strikes can cause cardiac arrest, but when our volunteers arrived the boy was conscious and breathing," Clarke said.

"We treated two more injuries from lightning burns in the space of twenty minutes - all three people were holding umbrellas at the time, which acts as a conductor for electricity," he added.

Listening to MP3s During Lightning Could Be Disastrous to Your Brains