Light flashes from the human eye were captured for the first time during radiotherapy. The findings of the study are published in The Red Journal. 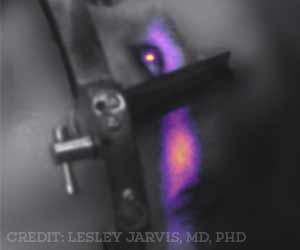 For decades, theories have existed to explain patient reports of seeing light flashes during radiation therapy, even with their eyes closed. However, no one has been able to secure evidence of this sensation in humans to prove their theory.


‘For the first time, Cherenkov light emission from the eye of a patient undergoing radiotherapy was captured by scientists.’
Read More..

A team of researchers at Dartmouth's and Dartmouth-Hitchcock's Norris Cotton Cancer Center led by radiation oncologist Lesley Jarvis, MD, PhD and Irwin Tendler, MEng, have collected real-time data to show that during head and neck radiation therapy, enough light is produced inside the eye to elicit such a visual sensation. This evidence, and their explanation of it, "Experimentally Observed Cherenkov Light Generation in the Eye During Radiation Therapy," is newly published in The Red Journal (International Journal of Radiation Oncology, Biology, & Physics).

"Overall, the idea of imaging light emission from humans undergoing radiotherapy is novel and was also first suggested and developed at Dartmouth," says Tendler. "Our newest data is exciting because for the first time, light emission from the eye of a patient undergoing radiotherapy was captured. This data is also the first instance of evidence directly supporting that there is enough light produced inside the eye to cause a visual sensation and that this light resembles Cherenkov emission."

Light emission from the eye is very subtle, hard to detect, and likely why no one has been able to record evidence of this phenomenon. To accomplish this, the team leveraged special technology called the CDose camera imaging system, an engineering innovation manufactured by Dartmouth spin-off company, DoseOptics, LLC. The camera provides live views of light emission from biological systems (animal and human) during radiotherapy. "As the radiation beam passes through the eye, light is generated within the vitreous fluid. Our real-time data rigorously showed that the amount of light produced is sufficient to elicit a visual sensation--a topic that has been debated in the literature," explains Tendler.

"By analyzing the spectral composition, we also show that this emission can be classified as Cherenkov light--again, another contested point in the literature."

The benefits of the team's finding to cancer treatment are several-fold:
The team's next steps are to correlate how recorded ocular Cherenkov light and delivered dose can provide information about long-term visual outcome, and to develop the tool to use in prediction and measurement of eye dose.

Cherenkov radiation is emitted when electrons are fired through water at a speed faster than the speed with which light travels in water.

Methods to Predict and Avoid Side Effects of Radiotherapy Identified

Around five percent of cancer patients could suffer from radiation side effects. The use of biomarkers could predict radiotherapy-related toxicity.

Eye allergies are treated with different types of eye drops such as lubricants, antihistamines, NSAIDs and corticosteroids. Eye drops are used to reduce allergies, eye infection and help healing.

Hodgkins lymphoma or Hodgkins disease has the distinction of being the first cancer to be cured by chemotherapy or by radiotherapy.

A detailed account of radiation, its mode of action, side effects and dosage in the treatment of cancer.

Rhabdomyosarcoma is a rare type of cancer affecting the striated muscles. It mostly occurs in children.

A comprehensive eye exam can take an hour or more, depending on the doctor and the number and complexity of tests required to fully evaluate vision and the health of the patients eyes.