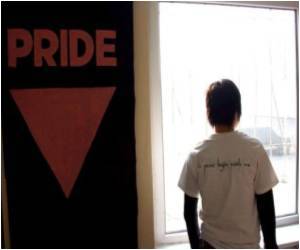 When Zaya told her sisters five years ago that she was a lesbian, they berated her and asked her what was wrong with her. When her father found out, he responded with brutal violence.

"He came to me and beat me pretty bad. He asked if I was gay, if I was a lesbian. I was so scared I told him I wasn't," explains the 25-year-old with cropped black hair, who like many people in Mongolia goes by one name.

Zaya, who lives in the capital Ulan Bator, says while her mother and sisters have gradually accepted her sexual orientation, her father is not so understanding and she continues to hide the truth from him.


"We're scared of what will happen. He's an aggressive man, he just wouldn't understand," says Zaya, who wears a T-shirt with the slogan 'Let peace begin with me' on the back.

Family acceptance of lesbian, gay, bisexual and transgender (LGBT) children significantly impacted the risk of depression and better overall health in adulthood.
Advertisement
Zaya is not alone in her fear. Discrimination and abuse toward sexual minorities in Mongolia is widespread, according to a report presented to the UN Human Rights Council in November last year.

"Every aspect of their life is filled with discrimination," said Robyn Garner, executive director of the Lesbian, Gay, Bisexual and Transgender Centre in Ulan Bator, Mongolia's first non-governmental organisation for LGBT rights.

"There are very few people that don't have a tale to tell of discrimination and violence," said Garner, an Australian who has worked for gay rights in Mongolia for seven years.

There are no reliable data on the number of homosexuals in the country, which has a population of roughly 2.7 million, as many remain in the closet due to the social stigma associated with a gay lifestyle.

That mentality took root during the decades Mongolia spent as a Soviet satellite state. That period ended in 1990, but old habits are proving tough to break.

Several gay men have been brutally murdered in recent months, and the cases remain unsolved. Other homosexuals recount tales of abduction and sexual assault. Workplace violence and discrimination is also common, Garner says.

"It commonly portrays us as sexual perverts and crazies. Most terminology is sensationalised," he said.

In 2009, the US government said in a rights report on Mongolia that some media had "described gay men and lesbians with derogatory terms and associated homosexual conduct with HIV/AIDS, paedophilia, and the corruption of youth."

The LGBT centre recently released a media style guide -- one aspect of their fight for social justice for sexual minorities.

But the group itself has faced an uphill battle. It took three years before the government accepted its official registration in December 2009.

One rejection letter from the justice ministry said the group's name "conflicts with Mongolian customs and traditions and has the potential to set the wrong example for youth and adolescents".

The group only gained acceptance when the human rights advisor to President Tsakhia Elbegdorj personally intervened.

Otgonbaatar says he is hopeful that things can change in Mongolia. One major step, he says, would be the introduction of anti-discrimination legislation to enhance the legal protection for sexual minorities.

Last month, more than 80 countries including Mongolia presented an initiative to the UN Human Rights Council urging the international community to end violence against homosexual, bisexual and transgender individuals.

But Garner -- whose group has recently launched a nationwide anti-discrimination awareness campaign -- says she knows that prevailing attitudes towards gays will not change overnight.

"Even if we get anti-discrimination law, we still need to see a change in the existing societal mindset," she said.

The attitude that homosexuality is largely a Western phenomenon is still prevalent, Otgonbaatar adds, laughing as he recalls someone telling him: "I thought it only existed in Hollywood movies."

"We want to keep LGBT rights in people's faces. I call it queer saturation," Garner said.

Zaya -- who spoke to AFP at the LGBT Centre, decorated with a large banner with a pink triangle and the word PRIDE -- says despite improved tolerance among Mongolians, especially in Ulan Bator, she still lives in fear.

Lesbian, gay and bisexual (LGB) individuals, who live in states that instituted bans on same-sex marriage are more at risk of developing psychiatric disorders, according to a new study.
Advertisement
<< You Tube Goes Live - Video Sharing Site to Also Broadcast N...
Side Effects-Free Oestrogen Therapy on the Anvil >>

A-Z Drug Brands in India Post-Nasal Drip The Essence of Yoga Sinopril (2mg) (Lacidipine) Noscaphene (Noscapine) Nutam (400mg) (Piracetam) Drug Side Effects Calculator Turmeric Powder - Health Benefits, Uses & Side Effects How to Reduce School Bag Weight - Simple Tips Blood Donation - Recipients
This site uses cookies to deliver our services.By using our site, you acknowledge that you have read and understand our Cookie Policy, Privacy Policy, and our Terms of Use  Ok, Got it. Close
×