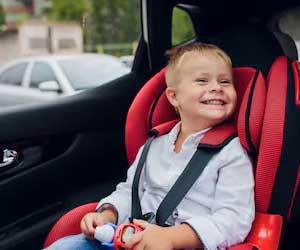 It's not safe to let your kid sleep in car seats when not traveling. Sitting devices like car seats and strollers are essential for the safety of the kid, but improper usage of such sitting devices can cause sleep-related infant deaths, reveals a new study. The findings of the study are published in the journal Pediatrics.

A new infant death study underlines the need to follow the seats' instructions and to use them only for their intended purpose.


In a review of infant deaths that occurred while children were sleeping in sitting devices, researchers determined that more than 60% of the deaths were in car seats. The car seats were used as directed in less than 10% of those cases.


‘Routine sleeping in sitting devices is warned against for babies as putting your kid to sleep in a portable car seat at home can be deadly.’


"While car seats are important when you're traveling with an infant, it's best not to have the infant sleep in the car seat when you're at home," said researcher Rachel Moon, MD, a pediatrician at the University of Virginia Children's Hospital. "The safest place for a baby to sleep is on a firm, flat surface."

Moon and colleagues set out to shed light on a poorly documented category of infant deaths: deaths while sleeping in sitting devices, such as car seats and strollers. The American Academy of Pediatrics discourages allowing children to sleep in such devices routinely.

Of almost 12,000 infant sleep-related deaths reported between 2004 and 2014, approximately 3% - 348 deaths - occurred in sitting devices, the researchers found. Car seats were the site of 62.9% of these deaths, but in the "great majority" of cases, the infant was not traveling in a car, the researchers report. Out of the total deaths in a sitting device, only .2% occurred in a vehicle that was in motion or temporarily parked. More than half of car seat deaths occurred at the child's home.

While the researchers did not establish why the infants were in car seats when not traveling, they note that some parents may not be able to afford a crib or bassinet, or people may use the seats to hold the child while doing other tasks.

After car seats, the most common site for sleep-related infant deaths while sitting were bouncers, swings, and similar devices (122 deaths, 35.1%). Strollers were the site of only 2% of deaths (seven of the 348).

Overall, nearly two-thirds of the deaths in sitting devices occurred while the devices were not being used for their intended purpose and in compliance with their instructions, the researchers report.

Rear-facing Car Seats can Save Children from Car Crashes
Parents are recommend to use rear-facing car seats for toddlers, as it can protect the child's head, neck and spine and also prevent from fatal accidents.
READ MORE

New Recommendations for Optimizing Rear Car Seat for Children
The Children's Hospital of Philadelphia (CHOP) has come out with a new report which provides details about optimizing the rear seat of passenger vehicles.
READ MORE