A federal judge in San Francisco has ruled that the government cannot deny health benefits to a lesbian court employee's wife, says Lisa Leff reporting for the Associated Press.

Health insurance benefits were being denied to a staff lawyer for the 9th U.S. Circuit Court of Appeals, Karen Golinski's wife, Amy Cunninghis.

A 1996 law known as the Defense of Marriage Act (DOMA), which bars government recognition of same-sex unions was quoted to support denial of health care.


In a ruling earlier this week, U.S. District Judge Jeffrey White said DOMA is unconstitutional as it violates Golinski's right to equal protection before the law, and therefore discriminates against same-sex married couples. Hence, the government's refusal to furnish health insurance to Karen Golinski's wife was unjustified.

Golinski, and Amy Cunninghis were married during the brief window in 2008 when same-sex marriages were legal in California. The Office of Personnel Management ordered Golinski's insurer not to process her application.

The law defines marriage as a union between a man and woman, and prohibits the government from granting benefits such as Social Security and Medicaid to same-sex couples. 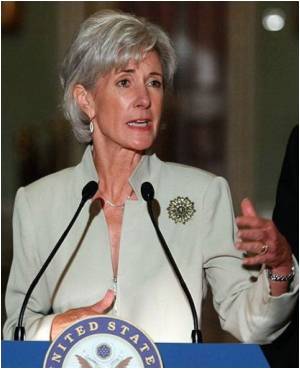 Americans to Get Better Value for Money in Health Insurance, Says Sebelius
Kathleen Sebelius, Secretary for America's .(HHS), recently announced that health insurance consumers will receive better information on the value of their coverage.
READ MORE