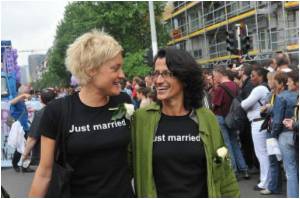 Two professors of University of Illinois have said that that lesbian mothers experience intimate partner violence are often reluctant to seek help for fear of losing custody of their children.

"A lesbian mom's abuse situation is unique in that she fears losing her kids to the biological father or the state instead of the abuser," said Jennifer Hardesty, a U of I associate professor of family studies.

Suicide - A Big Risk Among Bullied Gays and Lesbians

Gays and lesbians who are bullied are at increased risk of suicides due to disruptions in their hormones and associated cardiovascular problems.
Advertisement

The researchers recruited 24 mothers who had been abused by a same-sex partner and interviewed them about their experiences.


On average, the women had been in their relationship for six years.

"Many of the mothers in the study believed that people were prejudiced against them, and they assumed that people with power would use that prejudice to hurt them. That perception inhibited their willingness to openly seek help," said Ramona Faith Oswald, a U of I associate professor of family studies and co-author of the study.

The study appears in the issue of Violence Against Women.