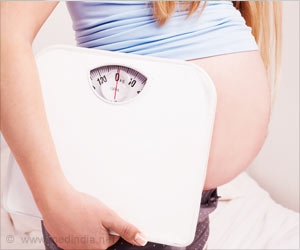 Advertisement
‘During pregnancy, lower levels of adiponectin are associated with higher risk of gestational diabetes and higher leptin levels are observed in women who develop pre-eclampsia.’

Jara and his co-authors at Ohio State investigated the effects of race and pre-pregnancy BMI on serum adiponectin, leptin, the leptin-to-adiponectin ratio (LAR) throughout pregnancy and postpartum, and their effects on weight gain during pregnancy.

Overall, adiponectin levels decreased from early to late pregnancy, with an increasing trend after birth. Higher pre-pregnancy BMI was associated with lower levels of adiponectin. African-American women had lower serum adiponectin at each time point they were tested, compared to Caucasian women with equivalent pre-pregnancy BMIs.

Pregnancy Weight Gain Calculator
Calculate your weight gain during pregnancy and find out the ideal weight gain limit for your month ...

Top 7 Fruits to Eat During Pregnancy
Make it a habit to incorporate at least 2 serving of fruits every day during pregnancy to reap the ....