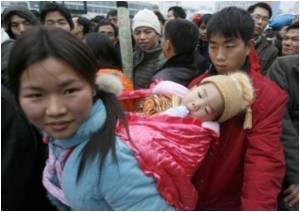 After losing her job in the Chinese telecommunications industry five years ago, Zhao Weimin decided to start a business selling children's gifts in the northern port city of Tianjin.

Lacking money and experience, Zhao and her husband sought the help of the Tianjin Women's Business Incubator -- a government-backed microfinancing programme that has helped thousands of laid-off women get back on their feet.

Entrepreneurs Take the 'Cup'cake - Dessert Revolution in the US

The cupcake, a small, round sponge that fits in the cup of a hand, has replaced bed-and-breakfasts and restaurants as the eldorado for entrepreneurs, with some of the boldest eyeing conquests abroad.
Advertisement

"We had to do something," Zhao told AFP in an interview, explaining the couple's decision to start a small business.


"We had to eat and we also have a child. We had no other choice."

The business incubator was launched in 2000, a few years after the Chinese government started a major restructuring of loss-making state-owned enterprises that resulted in massive lay-offs across the country.

The Delhi High Court ruled last year that a ban on homosexual acts, in place since British colonial times, was discriminatory and unconstitutional.
Advertisement
Millions of workers, many of them women aged in their 40s and 50s, lost their jobs during the overhaul and struggled to find new employment.

The Tianjin initiative -- backed by the city government, Australia and the United Nations Development Programme -- has helped more than 10,000 women start up businesses or keep their companies afloat, said programme official Li Jing.

After being knocked back by banks and friends, Zhao and her husband Zhang Xiangjun, whose own employer had gone bankrupt, applied to the business incubator for a loan.

Their idea was given the thumbs-up and the couple received training in how to run a business and, most importantly, an interest-free loan of 4,000 yuan (600 dollars), which they used to lease a shop space in Tianjin.

Later they borrowed another 20,000 yuan to buy photographic equipment so they could expand their service to include children's portraits.

"Our loan was too small for banks, and friends weren't prepared to lend us money because we had just been laid off and had no ability to repay the loan," said Zhang, displaying some of their products such as a calligraphy brush specially made for a child using their own hair.

Zhao and Zhang now employ 20 people and their business is profitable.

The couple's struggle to get financing is not unusual, said Li.

In many cases, state-owned commercial banks are not prepared to lend money to entrepreneurs because the size of the loan is too small or they have no assets to offer as collateral.

"Banks have their own standards and need to consider your ability to repay the loan and consider the problems of risks," Li said.

While many women have no experience running a business, only a "very, very small" number default on their repayments, she added.

The benefits of microfinance for the poor were highlighted when microcredit pioneer Muhammad Yunus of Bangladesh won the Nobel Peace Prize in 2006.

In China, microfinancing "potentially plays a very important role because it is filling a gap that the formal banking system doesn't fill," said Patrick Chovanec, an economics professor at Tsinghua University in Beijing.

After taking a redundancy from a carpet company four years ago, Li Qing teamed up with her younger sister to sell bed linen.

Pooling their savings, the pair registered a trademark name "Shimeilian" and opened two stores in Tianjin, one of China's biggest cities.

Success came quickly -- the sisters opened their fourth store in 2009 but needed more money to continue expanding their network of outlets.

"We were growing so fast, our capital wasn't enough so we started to borrow," said Li, standing in a small warehouse stacked floor-to-ceiling with colourful sheets, duvet covers and pillow cases.

The sisters borrowed a total of 130,000 yuan from the women's business incubator which they used to open another 10 stores in Tianjin.

They now employ more than 25 people and expect sales to exceed three million yuan this year -- compared with 200,000 yuan in their first year of operation.

"Our brand is quite famous now and lots of clients come back to buy more things," Li proudly told AFP.

Other loan recipients include Jin Lan, 54, who borrowed 50,000 yuan to start a business manufacturing and selling traditional Chinese handicrafts.

Unlike many of the women, Jin had previous business experience. She supplied handicrafts to supermarkets for 12 years but didn't have collateral for a bank loan so she contacted the business incubator.

"There's less pressure to repay the loan and the conditions are more relaxed than at the bank," Jin told AFP.

"If I can't meet my monthly repayments, one of the other women in the group will help me."

Facebook and Twitter stars shared lessons learned with young entrepreneurs aspiring to be the next hot technology firm.
Advertisement

Two young German entrepreneurs presented what they described as a Europe-wide first newspaper tailored to readers' individual wishes and delivered to their door before 8:00 am.
Advertisement

Citron lime also known as rough lime or keffir lime is a member of the citrus family of fruits. Citron lime ...

Fruits and vegetables can affect an individuals health in numerous ways. Read on to discover the 7 best ...