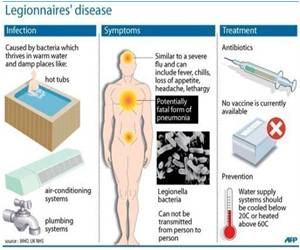 The death toll from Legionnaires' disease outbreak, which hit Quebec in mid-July, has increased to six and has infected about 65 people, according to health officials.

Health authorities in Scotland have confirmed that there has been a second death associated with the recent outbreak of Legionnaires' disease in the country.
Advertisement

"It's the largest legionellosis outbreak in Canada in recent years."

Health authorities suspect improper maintenance of cooling towers in air conditioning systems are at fault for the outbreak.

Visit to Dentist Resulted in First Case of Legionnaire's Disease

The first known case of Legionnaire's disease that was caused by a visit to the dentist has been reported by doctors.
Advertisement
Legionella bacteria grow in stagnant water in such appliances, then spread with droplets expelled by the system during operation.

The 68 cooling towers housed in 28 buildings were inspected, cleaned and disinfected, but the operation has not put an end to the epidemic.

The disease, which poses a risk for people with weak immune systems, can be treated with antibiotics.

Legionnaire's disease -- discovered in 1976 during a veterans convention in the United States, where 29 people died -- is an infection that causes high fever, dry cough and pneumonia.