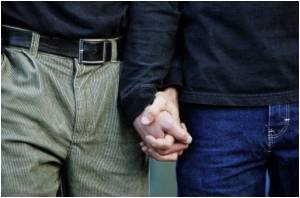 A new study has found that gay men who live in states where same-sex marriage are legalized leads a healthier, less stress-filled lives.

The study, "Effect of Same-Sex Marriage Laws on Health Care Use and Expenditures in Sexual Minority Men: A Quasi-Natural Experiment," is online in the American Journal of Public Health.

Among HIV-positive men, there was no reduction in HIV-related visits, suggesting that those in need of HIV/AIDS care continued to seek needed health care services.

For the study, researchers surveyed 1,211 patients from a large, community-based health clinic in Massachusetts that focuses on serving sexual minorities. Examining the clinic's billing records in the wake of the approval of Massachusetts' same-sex marriage law, researchers found a reduction in hypertension, depression, and adjustment disordersall conditions associated with stress.

"These findings suggest that marriage equality may produce broad public health benefits by reducing the occurrence of stress-related health conditions in gay and bisexual men," Dr. Hatzenbuehler said. Previous studies have documented that excluding lesbian, gay, and bisexual individuals from marriage has a stressful impact on this population.

Dr. Hatzenbuehler's study is the first study to examine whether same-sex marriage policies influence health care use and health care expenditures among sexual minorities. Lesbians were not included in the survey due to insufficient sample size among the patients who visit the clinic.

"This research makes important contributions to a growing body of evidence on the social, economic, and health benefits of marriage equality," Dr. Hatzenbuehler said. The research findings presented here are those of the researcher and are not necessarily the views of the Robert Wood Johnson Foundation.

More News on:
AIDS/HIV - Prevention And Transmission How to Save your marriage Divorce: Pros and Cons Is Life Better Staying Single or Getting Married? Health Insurance - India

Genetics of Gay Abandon
Homoesexuality (or) Same Sex Love is the hottest most discussed human trait. There has been a hunt ....

Differently Wired and Gay  Are They Children of a Lesser God?
Marriages (read heterosexual) are made in heaven, they say. But what about homosexual partnerships? ...

Mental Health Concerns of Transgender Population Living in Chennai, South India  A Study
A study on Transgender population in Chennai, reveals a strong need for both Psychologists and ......