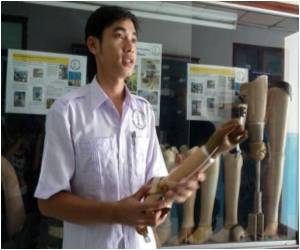 "You need to close (the area) where the bacteria would enter the body, and that's where the skin is," said Thomas Webster, associate professor of engineering and orthopaedics at Brown University.

Webster and a team of researchers at Brown may have come across the right formula to deter bacterial migrants. The group reports two ways in which it modified the surface of titanium leg implants to promote skin cell growth, thereby creating a natural skin layer and sealing the gap where the device has been implanted into the body. The researchers also created a molecular chain to sprinkle skin-growing proteins on the implant to hasten skin growth.


The findings are published in the Journal of Biomedical Materials Research .

The researchers, including Melanie Zile, a Boston University student who worked in Webster's lab as part of Brown's Undergraduate Teaching and Research Awards program, and Sabrina Puckett, who earned her engineering doctorate last May, created two different surfaces at the nanoscale, dimensions less than a billionth of a meter.

A bone-creating protein has been found to be more effective than bone-grafting in dental implants.

Find a Hospital Sanatogen Find a Doctor Selfie Addiction Calculator Iron Intake Calculator Turmeric Powder - Health Benefits, Uses & Side Effects Vent Forte (Theophylline) The Essence of Yoga Noscaphene (Noscapine) Color Blindness Calculator
This site uses cookies to deliver our services. By using our site, you acknowledge that you have read and understand our Cookie Policy, Privacy Policy, and our Terms of Use