Lebanon may not be good at some things; getting a stable government is a case in point. But they sure are great at a lot of other stuff, and the best is probably their table's pleasures!

Reports say that abandoned wheelchairs and crutches are propped up against the walls in the entry hall, left there for good by believers who say she healed them when no medicine could.
Advertisement 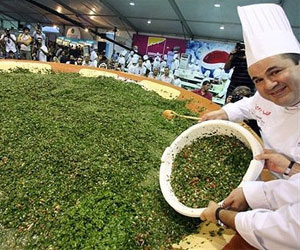 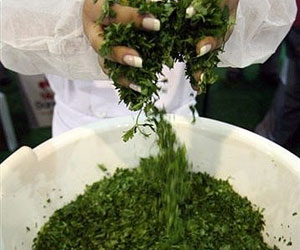 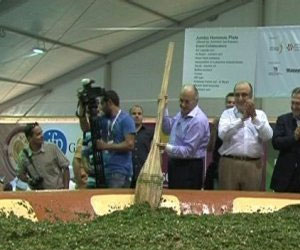 The tabbouleh record came only a day after Lebanon broke a Guinness record with a two-tonne serving of the chickpea-based dip hummus.


The tiny Mediterranean country -- which has yet to see a government formed over four months after a general election -- also set a record in August for the largest ever kebbe, a dish of minced meat and cracked wheat.

To Lebanon's Kamal, it's a job like any other: 'I send clients at luxury hotels photo albums of the girls. It's like selling goods,' say reports.
Advertisement
National songs blared from loudspeakers as the white-clad cooks mixed the tabbouleh into a mega-sized pottery dish on Sunday cheered on by thousands of onlookers, some waving Lebanese flags.

"From here, from Lebanon," screamed the crowds in response. "One hundred percent Lebanese!"

A battle over hummus and tabbouleh between Lebanon and Israel -- two neighbours still technically at war -- emerged last year and efforts have been underway ever since to clearly identify such dishes as exclusively Lebanese.

Both hummus and tabbouleh, as well as other treats such as baba ghannouj, an eggplant dip, are widely popular in Lebanon, Israel and around the globe.

"El Hommos Lebnaneh & Tabbouleh Kamen (Hummus is Lebanese and Tabbouleh is too) is an attempt to break the current Guinness world records of hummus and tabbouleh, reaffirming the Lebanese proprietorship of these two dishes," said a statement issued by the industrialist association and food syndicate, which planned the weekend events.

"It's pretty much common knowledge that I don't back down," said Fadi Abboud, who heads the Association of Lebanese Industrialists, just before the results were announced.

"And this time, I'm not stepping down."

Lebanese industrialists have said their case was similar to the one over feta cheese in which a European Union court ruled in 2002 that feta is exclusively Greek.

They argue that just as France and Scotland have succeeded in protecting their geographical appelation rights for sparkling wine from Champagne and Scotch whisky, so should Lebanon for some of its dishes.

Lebanon is a Smoker's Paradise

Lebanon has turned into a smoker's paradise where you can work, dine and have your hair styled in a cloud of smoke
Advertisement
<< Clean Living Spaces Make You Fairer In Judgment
Lily Allen In Pain Due To Arthritis >>

From nudist beach parties and wild bashes hosted by the likes of Paris Hilton, to gay clubs, gambling and showgirls, Beirut is rapidly earning a reputation as the sin city of the Middle East.

Why Do We Eat - Nutrition Facts
News Archive
News Resource
Advertisement
News Category
Five Love Languages Every Couple Should Know Go for a Walk to Speed Up Your Brain Function 5 Types of Tea Women Should Drink Daily Bodychecking Experience Does Not Protect Teen Hockey Players from Injury Yoga: A Powerful Weapon to Fight COVID-19
More News
Sign up for Wellness Consult a Doctor Sign up for Selfcare