Skilled motor movements, like those used in playing tennis, playing a piano, etc, require precise interactions between the motor cortex and the rest of the brain. Neuroscientists had long assumed that the motor cortex functioned something like a piano keyboard.

"Every time you wanted to hear a specific note, there was a specific key to press," says Andrew Peters, a neurobiologist at UC San Diego's Center for Neural Circuits and Behavior. "In other words, every specific movement of a muscle required the activation of specific cells in the motor cortex because the main job of the motor cortex was thought to be to listen to the rest of the cortex and press the keys it's directed to press."

But in a study published in this week's advance online publication of the journal Nature, Peters, the first author of the paper, and his colleagues found that the motor cortex itself plays an active role in learning new motor movements. In a series of experiments using mice, the researchers showed in detail how those movements are learned over time.


"Our finding that the relationship between body movements and the activity of the part of the cortex closest to the muscles is profoundly plastic and shaped by learning provides a better picture of this process," says Takaki Komiyama, an assistant professor of biology at UC San Diego who headed the research team. "That's important, because elucidating brain plasticity during learning could lead to new avenues for treating learning and movement disorders, including Parkinson's disease."

With Simon Chen, another UC San Diego neurobiologist, the researchers monitored the activity of neurons in the motor cortex over a period of two weeks while mice learned to press a lever in a specific way with their front limbs to receive a reward.

"What we saw was that during learning, different patterns of activitywhich cells are active, when they're activewere evident in the motor cortex," says Peters. "This ends up translating to different patterns of activity even for similar movements. Once the animal has learned the movement, similar movements are then accompanied by consistent activity. This consistent activity moreover is totally new to the animal: it wasn't used early in learning even with movements that were similar to the later movement."

"Early on," Peters says, "the animals will occasionally make movements that look like the expert movements they make after learning. The patterns of brain activity that accompany those similar early and late movements are actually completely different though. Over the course of learning, the animal generates a whole new set of activity in the motor cortex to make that movement. In the piano keyboard analogy, that's like using one key to make a note early on, but a different key to make the same note later."
Source: Eurekalert

Fluoxetine For Motor Recovery After Acute Ischemic Stroke
Use of fluoxetine is a promising drug for treatment in patients suffering with ischemic stroke and moderate to severe motor deficit.
READ MORE 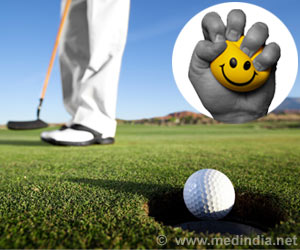 Tips for Golfers and Soccer Players on Reducing Pressure
Scientists suggest that soccer players or golfers can enhance their performance by squeezing a ball with, or clenching, their left hand before competition!
READ MORE