Lawsuits in Pfizer Nigeria Case to Continue - US Supreme Court 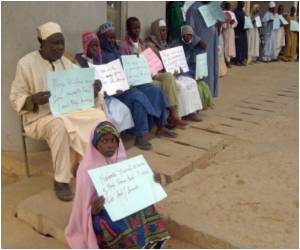 Lawsuits by Nigerian families against Pfizer who tested a new antibiotic on their children without proper consent were allowed to proceed when the US Supreme Court rejected the pharmaceutical giant's appeal.

By not hearing or commenting on the appeal, the justices let stand a US appellate court ruling that reinstated the suits, which accused Pfizer of carrying out an illegal trial of the experimental drug Trovan on 200 sick children during a meningitis outbreak in 1996 in Nigeria's Kano state.

Plaintiffs say 11 children died, and another 189 suffered deformities and other conditions such as blindness, brain damage and paralysis as a result of the drug trial.

Repercussions Of Moneyed Nations Weigh Heavily On Poorer Ones

According to UC Berkeley researchers , the financial costs of environmental damage caused by human activities in high-income nations disproportionately impact poor nations.
Advertisement
The triple epidemic of meningitis, measles and cholera in 1996 led to the deaths of over 12,000 people.

After two years of legal wrangling, Pfizer and Kano state reached a 75-million-dollar settlement which included 35 million dollars in compensation to the victims. Families of 192 children had sought compensation.

Pfizer had claimed that the Nigerians could not sue under the Alien Tort Statute, which allows foreigners to sue in US courts for violations of international law.

A US judge had ruled that the suits should be heard in Nigeria, but that decision was overruled by a US court of appeals in New York. Pfizer appealed.

The US government wrote in a filing that the Supreme Court should not take up the case, noting the Nigerian government's "alleged participation in the Trovan test."

The dismissal by the Supreme Court effectively gave the suits a green light to proceed.

Pfizer said it was disappointed with the order, but that it would continue to seek dismissal of the case on other grounds, "including the fact that Nigeria is the appropriate forum for the cases to be heard."

"The company looks forward to presenting its defenses in court and remains confident it will ultimately prevail in these cases," Pfizer said in a statement.

Lawyers have said that Nigerian families have refused 35 million dollars in compensation from US firm Pfizer over a drug trial blamed for children's deaths due to a DNA testing dispute.
Advertisement
<< Sugar Produced from Photosynthetic Bacteria
Tooth Regeneration Gel can Effectively Replace Fillings >>