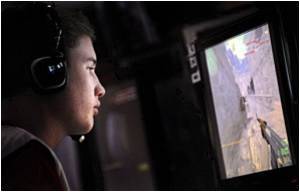 Videogame addicts all over are eagerly waiting for the launch of the latest installment of the popular 'Halo' series, a science fiction shooter game.

"Halo: Reach" is a much anticipated prequel to a hot videogame franchise billed as a pop culture phenomenon by Microsoft Game Studios, the publisher behind the title made for play exclusively on the company's Xbox 360 consoles.

More proof to confirm that screen addiction could spell trouble for teens. New research shows that it makes them more prone to a range of health problems including obesity and smoking.
Advertisement

"When it comes to the size and scope of a franchise and especially the dedication of the fans, no game is bigger than 'Halo,'" said Game Studios corporate vice president Phil Spencer.


"We're delivering on our promise to redefine blockbuster entertainment experiences and ultimately help make this year the biggest ever in Xbox history."

It is Possible to Overcome Severe Addictions, Though Not Quickly or Easily

It is possible to overcome severe addictions which destroy ones quality of life , though the process may not be quick or easy, says a ULCA Psychologist.
Advertisement
The videogame goes on sale a minute into Tuesday local time in more than 25 countries. Tens of thousands of shops signed on for a "midnight launch" expected to attract millions of the franchise's devoted fans.

The New York launch at a Best Buy electronics chain store will be broadcast live on Spike TV and aired in real-time on a billboard in Times Square.

"The launch of 'Halo: Reach' will likely rival some of the biggest entertainment launches of the year," said Chris Homeister, senior vice president and general manager of the home entertainment group at Best Buy.

The latest installment is set before the main "Halo" trilogy, which focuses on a super-soldier called "Master Chief" and his artificial-intelligence companion battling to save humanity from an alien alliance called the Covenant.

The prequel tells "the tragic and heroic story" of a group of soldiers making a stand against Covenant forces on a planet called Reach.

More than 2.7 million players participated in a "Halo: Reach" multi-player online test of the videogame beta in May, according to Microsoft.

The "Halo" franchise is the creation of US videogame studio Bungie.

The first title, "Halo: Combat Evolved" was released in 2001 and the franchise has attracted a cult following and inspired novels, action figures, comic books, and clothing.

More than 34 million copies of "Halo" videogames have been sold according to Microsoft.

Find a Doctor Sanatogen Indian Medical Journals Sinopril (2mg) (Lacidipine) Iron Intake Calculator How to Reduce School Bag Weight - Simple Tips Drug - Food Interactions The Essence of Yoga Noscaphene (Noscapine) Vent Forte (Theophylline)
This site uses cookies to deliver our services.By using our site, you acknowledge that you have read and understand our Cookie Policy, Privacy Policy, and our Terms of Use  Ok, Got it. Close
×