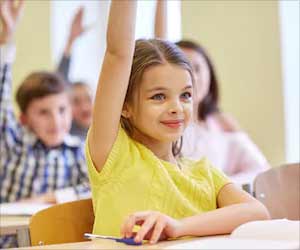 According to a study conducred in Kansas one hour delay in school start time can help improve sleep in adolescents and reduce risk of auto accidents.
Advertisement
‘Students benefit from later school start times with increased sleep duration, less sleepiness while doing homework, and improved academic engagement. Hence, it is vital to consider that this policy change is critical for the health and well-being of students. ’
Read More..

School Recess Time Needs to be Extended for Children to be More Active: Study

School recess time can be extended so that the children can be more active, finds a new study.
Advertisement
The American Academy of Sleep Medicine recommends that middle schools and high schools should start at 8:30 a.m. or later to support teen health, alertness and safety. However, a previous data analysis by the Centers for Disease Control and Prevention found that only 14% of high schools and 19% of middle schools started at 8:30 a.m. or later.

"The study findings are important because getting enough sleep is critical for adolescent development, physical health, mood, and academic success," said Meltzer.

"I don't know how many of our high school students have come up to me and said, 'This has changed my life for the better.' They've told me they're getting up to an hour of additional sleep before school starts," Siegfried said. "That extra sleep makes a real difference in terms of health and wellness. The input from our students and the numbers from this landmark study point to the same conclusion: The change in our start times has been a positive step and benefited our students' everyday routines."

The research abstract will be presented Wednesday, June 12, in San Antonio at SLEEP 2019, the 33rd annual meeting of the Associated Professional Sleep Societies LLC (APSS), which is a joint venture of the American Academy of Sleep Medicine and the Sleep Research Society.

Meltzer is also the senior author of another abstract from this study, "Impact of Changing School Start Times on Teachers/Staff," which found significant benefits of later school start times for middle and high school teachers and school-based staff. They reported increased sleep duration due to later wake times, as well as improvements in daytime functioning.

"This is the first large study to examine the impact of healthy school start times on teachers and staff," said Meltzer. "It is important to consider that this policy change, critical for the health and well-being of students, also impacts other members of the school community."

Nap Time Can Improve Performance in School Among Tired Teens

A short nap time can help improve the quality of performance in school for tired teens, according to a study by researchers at University of Delaware.
Advertisement
<< New Radiotracer can Identify Nearly 30 Types of Cancer
Replicating Fetal Bone Growth Process Could Help Heal Large ... >>

Teens who start school before 8:30 am are at a higher risk of depression and anxiety, even if they are doing everything else right to get a good night's sleep.