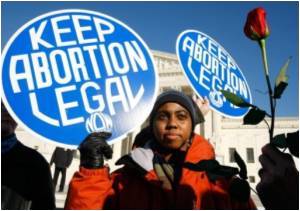 The Kansas's Pain-Capable Unborn Child Protection Act bars abortions at 22 weeks gestation, generally 20 weeks after conception, except for those necessary to save the mother's life.

Australian police are investigating whether women treated at an abortion clinic were deliberately infected with hepatitis C, as the number of cases linked to the centre rose to 22.
Advertisement

"This is a historic day. So many determined people have worked long and hard to get these bills passed and I am happy to sign them into law today," Politico quoted Brownback as saying.


These bills are a reflection of the culture of life that is being embraced all across Kansas. They represent a mainstream, bipartisan and common sense approach to a divisive issue," he added.

The governor of Kansas on Thursday vetoed a bill aimed at restricting access to late-term abortions and allowing a woman's family members to sue abortion providers without her consent.
Advertisement
The legislation states, "By 20 weeks after fertilization, the unborn child reacts to stimuli that would be recognized as painful if applied to an adult human."

The legislation comes after a similar law was enacted in Nebraska last year.

According to the National Right for Life Committee, which drafted the model law, Idaho and Oklahoma state legislatures have also passed similar legislations and legislators in Alabama, Minnesota and Oregon have introduced similar initiatives.

"States have a compelling interest in protecting unborn children who are capable of feeling pain from abortion. Kansas is the second state to recognize this obligation by enacting the Pain-Capable Unborn Child Protection Act, but we expect Idaho and Oklahoma to follow within days," said Mary Spaulding Balch, NRLC director of state legislation.

So far, legislators have introduced 916 measures related to reproductive health, 56 percent of which look to restrict abortion access, according to a new report released by the Guttmacher Institute.

Asia's 'Lost Boy' Generation is the Result of Abortions

A new study has found that abortions of female fetuses have led to a massive surplus of young unmarried men in India and China
Advertisement
<< Your Hunger Hormone Increases Your Ability to Sniff Out Foo...
Effecting Temporary Changes in the Brain Could Treat Learni... >>

Diaphragmatic Hernia Blood Donation - Recipients Accident and Trauma Care Find a Doctor Iron Intake Calculator Vent Forte (Theophylline) Loram (2 mg) (Lorazepam) Find a Hospital Noscaphene (Noscapine) Daily Calorie Requirements
This site uses cookies to deliver our services.By using our site, you acknowledge that you have read and understand our Cookie Policy, Privacy Policy, and our Terms of Use  Ok, Got it. Close
×