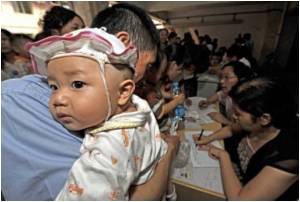 Last year, more than 8,324 people in China suffered from food poisoning and almost 137 of them died because of it, reveals a report.

According to a report by China's Ministry of Health, the number of sickened people increased 13 percent last year as compared to 2010 figures.


The report posted on the ministry's website, however, said that the number of deaths dropped 26 percent, Xinhua reports.


According to the report, a total of 189 food poisoning cases were recorded last year, registering a 14 percent drop from that of 2010.

The report said that the period from July to September (called the Q3 period), when 39 percent of the food poisoning cases and 45 percent of related deaths occurred, was the most dangerous quarter in 2011.

Why Do We Eat - Nutrition FactsDiet Lifestyle and Heart DiseaseOrganophosphorus PoisoningHunger Fullness and Weight ControlLabel Lingo on Food Items: DecodedPoisoningFact Sheet on Food PoisoningTop Diet Foods that Make you FatTop Food for DietersSelenium - Natural Source Better than Supplements
Sign up for Wellness Consult a Doctor Sign up for Selfcare