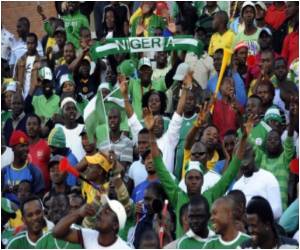 Thulani Ngcobo will have travelled 17,000 kilometres (10,000 miles), endured vitamin jabs to boost his sleep-deprived system, and can no longer face a FIFA-sanctioned stadium hotdog.

But on Sunday, the World Cup final will be the football fanatic's 38th match, after winning an uber-fan challenge's grand prize that made him the Guinness World Records holder for most games watched at football's biggest event.


"Everyone in the world would like to be me," said the 29-year-old asset controller from Pretoria.


Guinness set the never-attempted record at 20 games -- which Ngcobo passed on June 25, with a certificate handed over after post-match footage and witness forms confirmed his presence from the first to final whistle.

The schedule was planned for months with a car waiting outside stadiums as he galloped between host cities, with one day clocking up 3,000 kilometres for four games in 48 hours.

A cancelled flight once saw him arrive two minutes after kick-off, one of seven matches that didn't count toward his record, which will stand officially at 31.

"I haven't missed a game," said Ngcobo, who snatched sleep while travelling but says he immediately revived once in stadiums.

"This is a dream come true to me and it's once in a lifetime. If something comes like this, you need to pull yourself up and you must make sure you do whatever that you can do to succeed."

Ngcobo's sponsored seat at Sunday's final is worth more than his original World Cup budget of 2,000 rands (262 dollars, 208 euros), which he had set aside for 10 of the cheapest seats and 1,000 rands for ferrying between stadiums on minibus taxis.

Instead he got to football's biggest showcase in grand style after winning the "Last Fan Standing" competition run by South African mobile giant and World Cup sponsor MTN, which picked up the tab for his transport, accommodation and top seats.

A die-hard supporter of the Bafana Bafana national side and Kaizer Chiefs local premier team, Ngcobo attends up to five matches a week in season. His mobile phone ringtone is a football commentary. And he met his girlfriend at a match.

Of the 32 competing teams, only Switzerland and Greece went unseen by Ngcobo, after they crashed out early.

He lists the Japan-Paraguay last 16 clash as the most boring, Ghana's exit as the most disappointing, and the Mexican fans as the most passionate.

South African striker Siphiwe Tshabalala's goal -- the first in the tournament -- was his most exciting, but Portugal's 7-0 goal bonanza over North Korea also stood out for being "like watching the highlights live".

Even though ousted stars like England's Wayne Rooney, Brazil's Kaka and Argentina's Lionel Messi failed to shine at the goals, Ngcobo said seeing World Player of the Year Messi was a highlight.

"Previously I'd see him on TV. If you're watching him there you'd think that he's PlayStation or maybe he's played by a machine or something. Seeing him in the first game against Nigeria at Ellis Park was wow to me."

Not having seen his three-year-old son for a month, he returns to work on Tuesday after taking 23 days of leave from his job at the government's land reform department.

He advises would-be challengers to his record to enter competitions and to be true football fans.

"I'm not rich, I'm just normal but I managed to be in the Guinness World Records. It's all about taking chances," said Ngcobo, who blogs his trip at www.lastfanstanding.co.za

"I'm looking forward for a passionate fan to challenge me, but he must know that this is not easy. It's very tough," he said ahead of the semi-final in Cape Town.

"If you are passionate about soccer, you can challenge me."

Now, he's looking for a sponsor for Brazil's World Cup in 2014. Or the African Nations Cup in Gabon and Equatorial Guinea in 2012.

"After this I'll really, really miss the World Cup."

This World Cup: A Football That Powers The Cell Phone!
A football that generates electricity to charge a cell phone or power a light from a short kick is set for trial at the 2010 FIFA World Cup host South Africa.
READ MORE

Partying Workers in South Africa Get World Cup 'Illness'
25-year-old Sinehlamhla is one of the many workers to call up her boss after a night of football and heavy partying with the first excuse to skip work.
READ MORE