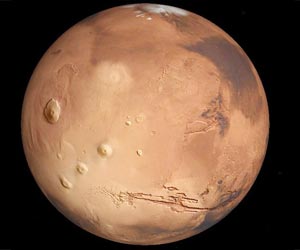 Scientists have discovered a large deposit of ice beneath a region of cracked and pitted plains on Mars, using data from NASA's Mars Reconnaissance Orbiter.

The deposit ranges in thickness from about 260 feet to about 560 feet, with a composition that is 50 to 85 percent water ice, mixed with dust or larger rocky particles, the researchers reported in the journal Geophysical Research Letters.

To Save on Weight, Refueling On Moon is the Best Way To Take Humans To Mars

A model has been developed by researchers at MIT to determine the best route to Mars, assuming the availability of resources and fuel-generating infrastructure on the moon.
Advertisement
‘The ice deposit found in Mars ranges in thickness from 260 to 560 feet, with a composition that is 50 to 85% water ice, mixed with dust or larger rocky particles.’

"This deposit probably formed as snowfall accumulating into an ice sheet mixed with dust during a period in Mars history when the planet's axis was more tilted than it is today," said lead author of the study Cassie Stuurman from the University of Texas at Austin in the US.

Exposure to highly energetic charged particles causes significant damage to the central nervous system. It results in cognitive impairments, brain inflammation.
Advertisement
Analyses of data revealed a deposit more extensive in area than the US state of New Mexico. The newly surveyed ice deposit represents less than one percent of all known water ice on Mars, the study said.

"This deposit is probably more accessible than most water ice on Mars, because it is at a relatively low latitude and it lies in a flat, smooth area where landing a spacecraft would be easier than at some of the other areas with buried ice," co-author Jack Holt from the University of Texas Institute for Geophysics said.

The Utopian water is all frozen now. If there were a melted layer -- which would be significant for the possibility of life on Mars -- it would have been evident in the radar scans, the researchers noted.

US astronaut Scott Kelly tweeted a photograph of an orange zinnia, which has flowered on the International Space Station.
Advertisement
<< Home-Based Telemental Health Services Help Depressed Elderl...
Learn How to Manage Medical Emergencies During Vacation >>

By using a molecular clock and fossil records, experts found that the Pitjuri plant has survived in its current form in the wild for around 750,000 years.

Accident and Trauma Care Noscaphene (Noscapine) Hearing Loss Calculator Blood Donation - Recipients Sanatogen Selfie Addiction Calculator Blood - Sugar Chart Turmeric Powder - Health Benefits, Uses & Side Effects The Essence of Yoga A-Z Drug Brands in India
This site uses cookies to deliver our services. By using our site, you acknowledge that you have read and understand our Cookie Policy, Privacy Policy, and our Terms of Use