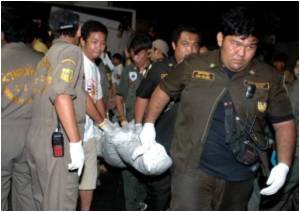 The new study conducted by Loran Nordgren of the Kellogg School of Management and Mary-Hunter Morris of Harvard Law School found that a "scope-severity paradox" exists in which judgment of harm tends to be based on emotional reactions. Thus, people have a stronger emotional response to singular identifiable victims rather than to an entire crowd of sufferers.

"We see this time and again on the news, where a missing person is featured as a leading story for months because there is emotional interest wrapped up in that single individual," said Nordgren.


"But, if you think of current stories such as the Chilean miners or the people affected by the BP oil spill, we find that it's harder to relate to those victims unless you get to know their personal stories. The bottom line is that it's difficult for people to connect when there are many faceless victims, he said.
Advertisement
To test their theory, the researchers conducted a series of three experiments.

In the first study, Nordgren and Morris asked participants to read a story about a financial advisor who defrauded his clients.fter reading the story, participants were asked to evaluate the severity of the crime and to recommend a punishment for the perpetrator, as well as to describe one of the participants in the case.

As predicted, participants in the small-scope condition judged the fraud case more harshly and recommended a longer jail sentence for the perpetrator.

The second experiment tested whether the researchers could correct this bias by manipulating the identifiability of the victims.

The participants read a story about a food processing company that sold tainted food that made people sick.

One group was given a basic description of the victims whereas a second group received a photo of one of the victims along with her name and occupation. As in the first experiment, stronger identifiability with the victim led participants to perceive the crime more severely and to recommend greater punishment for the company.

Finally, a third experiment examined the scope-severity paradox in real jury verdicts. The researchers looked at the outcomes of 133 U.S. court cases between 2000 and 2009 in which someone had been negligently exposed to either asbestos, lead paint or toxic mold.

They found that total damages decreased as the number of people affected increased.

"In all three studies, we found that increasing the number of people victimized by a crime actually decreases the perceived severity of that crime and leads people to recommend less punishment for crimes that victimize more people," said Nordgren.

According to Nordgren, the paradox is problematic especially in situations involving mass crimes like genocide in which harm is extreme and widely dispersed among a large population of people.

The study entitled "The Scope-Severity Paradox: Why doing more harm is judged to be less harmful," was published in the Social Psychological and Personality Science.

Loram (2 mg) (Lorazepam) Calculate Ideal Weight for Infants Hearing Loss Calculator Pregnancy Confirmation Calculator Find a Doctor Blood - Sugar Chart How to Reduce School Bag Weight - Simple Tips Noscaphene (Noscapine) Blood Donation - Recipients Find a Hospital
This site uses cookies to deliver our services.By using our site, you acknowledge that you have read and understand our Cookie Policy, Privacy Policy, and our Terms of Use  Ok, Got it. Close
×