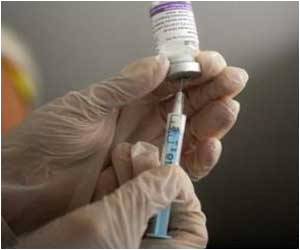 Scientists at Harvard University report that public immunization efforts may be much more sensitive than previously realized to small changes in the perceived costs or risks of vaccination.

In some cases, the spread of vaccine avoidance via social networks can make the difference between a minor, localized outbreak and an epidemic four times as large.

The finding, published in Proceedings of the Royal Society B, comes amidst one of the worst pertussis outbreaks in 50 years, in which 1,500 Californians have contracted whooping cough. Public health officials have cited reduced vigilance in vaccinating against the disease, which sickens 90 percent of those exposed to it.


"People sometimes say that voluntary vaccination is doomed to fail because of the 'free-rider' problem, in which people assume they will be protected by other people's immunity," says co-author Daniel I. Rosenbloom, a graduate student in Harvard's Program for Evolutionary Dynamics, led by Martin A. Nowak. "We find that's not true, as a population of self-interested people can defeat an epidemic. But the trouble is, success is sensitive to small changes in perception of a vaccine's costs -- in terms of money, time, inconvenience, or perceived side effects."

Hepatitis B is inflammation of the liver due to infection with the hepatitis B virus.
Advertisement
Together with lead author Feng Fu, Rosenbloom and Nowak are the first researchers to incorporate epidemiological data into modeling of how vaccination spreads by imitation in a social network. They found that increasing vaccination cost prompts more free-riding and leads to larger epidemics.

"Herd immunity in a social network is fragile," says Fu, a postdoctoral researcher in mathematical biology at Harvard. "As public perceptions of vaccine side effects change, a population can rapidly switch from high vaccination and herd immunity to low vaccination and a larger epidemic."

The good news, the authors say, is that the sensitivity of vaccination to perceived costs cuts both ways, meaning it's easy to get a population back on track with voluntary immunizations in the wake of an outbreak.

The Harvard team found epidemics are amplified when individuals mimic others in their social network, such as by avoiding immunizations during vaccine scares. Behavior driven by "strong imitation" -- reliance on anecdotal information from social contacts in deciding whether or not to immunize -- could cause up to a 14 percent decline in vaccination rates, and a four-fold increase in the size of a flulike epidemic.

"It's possible to be too clever for your own good in dealing with risk," Fu says. "These 'strong imitators' chase unwise risks, and their behavior exacerbates the fragility of herd immunity, causing it to break down more easily. Those in our model who ignored friends' outcomes and stuck with their own decision ended up better off, on average."

Fu, Rosenbloom, and Nowak's modeling also showed that in an epidemic, individuals who are hubs in a social network are likelier to choose vaccination than their less connected peers. However, this outcome emerges primarily from self-interested behavior -- the desire to avoid sickness -- rather than altruistic behavior to protect friends and family.

"Altruistic behavior could certainly lead to increased vaccination of hubs, but we find that it's not required -- self-interested behavior suffices," Rosenbloom says.

This work builds upon the tradition of evolutionary game theory, where researchers construct simple mathematical models to explore human behavior in social dilemmas and scenarios where people can cooperate for the common good. While this study specifically modeled influenza, the results apply to a wide variety of diseases, and are consistent with data from past epidemics.