Laos Dengue Epidemic Has Claimed 36 Lives This Year: WHO 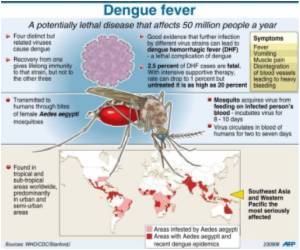 Mosquito-borne dengue fever has killed 36 people in Laos this year, the worst epidemic in at least five years, the World Health Organization (WHO) said Friday.

"It's a big epidemic year for dengue here," WHO epidemiologist Hannah Lewis told AFP from Laos.

She said that in the last five years the highest annual number of reported deaths was 22, with about 10 to 15 deaths the norm.


However, Lewis said there appeared to be no particular cause for the increase, and that dengue epidemics were cyclical.

The last severe epidemic in Laos was seven years ago, she said, adding that "many other countries in the region also have this same pattern."

The communist government has been taking appropriate measures, including prevention, fumigation, education and clinical training, she said.

Laos, with about seven million people, is one of Asia's poorest nations.

Noscaphene (Noscapine) Diaphragmatic Hernia Post-Nasal Drip Loram (2 mg) (Lorazepam) Drug Side Effects Calculator Pregnancy Confirmation Calculator Selfie Addiction Calculator The Essence of Yoga How to Reduce School Bag Weight - Simple Tips Blood - Sugar Chart
This site uses cookies to deliver our services. By using our site, you acknowledge that you have read and understand our Cookie Policy, Privacy Policy, and our Terms of Use