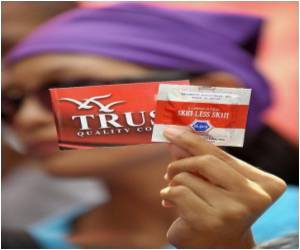 Los Angeles voters will now get to decide whether to make it mandatory for actors to wear condoms in pornographic films after the AIDS Healthcare Foundation easily managed to get minimum number of signatures for a ballot initiative.

Weinstein said that his foundation tried to lobby the lawmakers to enact a legislation that would have forced the film producers to make their actors wear condoms but without any success. Hence they were left with no choice but to bring out a ballot initiative. He added that the city clerk has got more than 71,000 signatures, way more than the 41,000 required to bring out a ballot initiative.


"All politicians have treated this as a hot potato issue. The city punts to the county, the county punts to the state, and the State Legislature has punted. We've taken it to the voters as a last resort, and that is testimony to the lack of leadership on the issue", Weinstein said.

Sex is fun but involves health risks such as sexually transmitted diseases (STDs or unplanned pregnancy specially in those who have multiple partners or in those having unprotected sex.
<< Reason for Regaining Lost Weight
Losing Weight by Crash Dieting is a Bad Idea >>

Safe, Effective Male Contraceptive Pill - The Long Wait
News Archive
News Resource
News Category
Parents are 'Winging It' on Their Kids' Mobile Use Ankle and Ankle Movements While Riding an Hoverboard Is It Healthy to Let Your Mind Wander? Walk Till it Hurts: Good News for Peripheral Artery Disease Patients Plus Size Models and Social Media: Where Do They Fit In?
More News
Sign up for Wellness Consult a Doctor Sign up for Selfcare

Color Blindness Calculator Find a Doctor A-Z Drug Brands in India Post-Nasal Drip Calculate Ideal Weight for Infants The Essence of Yoga Diaphragmatic Hernia Vent Forte (Theophylline) Nutam (400mg) (Piracetam) Hearing Loss Calculator
This site uses cookies to deliver our services. By using our site, you acknowledge that you have read and understand our Cookie Policy, Privacy Policy, and our Terms of Use