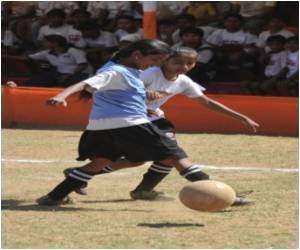 Females are more prone to knee injuries playing football and other sports, report researchers in the US.

The researchers found significant differences in knee alignment and muscle activation between men and women while kicking a ball.

The study appearing in the Journal of Bone and Joint Surgery offers a possible explanation on why female players are more than twice as likely as males to sustain an anterior cruciate ligament (ACL) injury.


"By analyzing the detailed motion of a soccer kick in progress, our goal was to home in on some of the differences between the sexes and how they may relate to injury risk," said orthopedic surgeon Robert Brophy of the Washington University School of Medicine in St. Louis, Missouri, and the study author.

A fracture is a condition where the continuity of the bone is lost. Majority of bone fractures occur because of high force impact or stress on a bone.
Advertisement
"This study offers more information to help us better understand the differences between male and female athletes, particularly soccer players."

Brophy and his colleagues from the Motion Analysis Laboratory and Sports Medicine Service at the Hospital for Special Surgery in New York used 3-D video-based motion analysis and electromyography to examine the differences between 13 male and 12 female college soccer players during the action of kicking a soccer ball.

They found that male players activate the hip flexors inside the hip in their kicking leg and the hip abductors outside of the hip in their supporting leg more than females. The males also generated more than twice as much activation of the gluteus medius and vastus medialis muscles on the upper leg and pelvis area.

"Since females have less activation of the hip abductors, their hips tend to collapse into adduction during the kick, which can increase the load on the knee joint in the supporting leg, and potentially put it at greater risk for injury."

Brophy said the study does not establish a cause-and-effect between muscle activation, knee alignment and ACL injuries, but added the data "moves us toward better understanding of what may contribute to differences in injury risk between the sexes and what steps we might take to offset this increased risk in females."

Football or soccer is one of the fastest-growing sports in the United States with approximately 20 million registered players, with a large number of them females.

Source: AFP
Advertisement
<< Risk of Major Bleeding Not Reduced by Lower-dose Heparin Us...
No Relief for Pain in Newborn With Sugar >>

Noscaphene (Noscapine) Sanatogen Find a Doctor Drug - Food Interactions Diaphragmatic Hernia Daily Calorie Requirements Post-Nasal Drip Selfie Addiction Calculator Color Blindness Calculator How to Reduce School Bag Weight - Simple Tips
This site uses cookies to deliver our services.By using our site, you acknowledge that you have read and understand our Cookie Policy, Privacy Policy, and our Terms of Use  Ok, Got it. Close
×