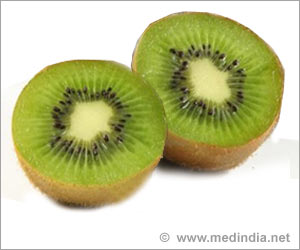 Kiwifruit's DNA sequence has many genetic similarities between its 39,040 genes and other plant species, including potatoes and tomatoes, say scientists.

The study also has unveiled two major evolutionary events that occurred millions of years ago in the kiwifruit genome.

Zhangjun Fei, a scientist from the Boyce Thompson Institute at Cornell University, said that the kiwifruit is an economically and nutritionally important fruit crop.


He said that the fruit has long been called 'the king of fruits' because of its remarkably high vitamin C content and balanced nutritional composition of minerals, dietary fiber and other health-benefits.
Advertisement
One of the most remarkable findings of the study was uncovered when scientists observed a high percentage of similarities within the kiwifruit DNA.

The data revealed two unusual mishaps that occurred in the process of cell division about 27 and 80 million years ago, when an extensive expansion of genes arose from an entire extra copy of the genome, followed by extensive gene loss.

When genes are duplicated, the extra genes can mutate to perform entirely new functions that were not previously present in the organism. This process, called neofunctionalization, can occur with no adverse effects in plants and, in the case of kiwifruit, was quite beneficial.

Fei said that the duplication contributed to adding additional members of gene families that are involved in regulating important kiwifruit characteristics, like fruit vitamin C, flavonoid and carotenoid metabolism.

The study has been published in Nature Communications.

Health Benefits of Kiwi Fruit
Kiwi fruit is a delicious fruit that contains flavonoids, minerals and vital vitamins such as ......

Kiwi Fruit Growers Plan to Use Antibiotic Spray to Fight PSA
Kiwifruit growers are planning to spray their vines with antibiotics following the attack of the ......

France's Mini-kiwi Fruit Set To Go Places
It's smaller than a kumquat -- about the size of your thumb -- and smooth-skinned like a tomato. ......