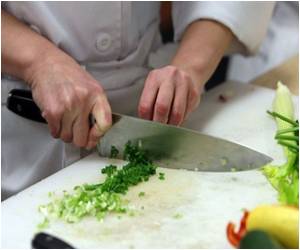 Although only 9 percent of reported foodborne illness outbreaks occur in the home, researcher and K-State food safety specialist Jeannie Sneed estimate the actual number of incidents is much higher.

Research shows a leading cause of cross contamination within the home is actually an object associated with cleaning, the kitchen towel.
Advertisement


Lead researcher Jeannie Sneed said the study showed some unique observations and areas of weakness when it comes to consumers' kitchen behavior.

Researchers believe this could be one of the most critical findings of the study, because cloth towels can quickly and easily become contaminated at significant levels, including microorganisms that potentially can lead to foodborne illnesses.

Other researchers found that salmonella, bacteria commonly found in raw meat and poultry products, grows on cloths stored overnight, even after they were washed and rinsed in the sink. This is why Sneed recommends washing cloth towels after using them while preparing a meal, or using paper towels and discarding them after each use.

Another observation from the study was cell phone handling during food preparation and the lack of proper sanitation afterward. While electronic devices are useful tools for communication, entertainment and a method of gathering recipes, they add another potential source of contamination.

"We often take our cell phones and tablets into the kitchen," Sneed said, "but what about all the other places we take them? Think of how many times you see someone talking on their cell phone in places like the bathroom, where microorganisms such as norovirus and E. coli are commonly found."

If such devices will be used in the kitchen, Sneed recommends treating them as potential hazards and wiping the surfaces with a disinfectant solution frequently. The U.S. Department of Agriculture (USDA) hopes to conduct further research on the use of cell phones and tablets in the kitchen.

The 123 participants of the study were randomly assigned to three separate groups. The first group was given an education program on the four national Food Safe Families campaign messages of clean, separate, cook and chill. The second group viewed and discussed the Ad Council public service announcements that focused on the same Food Safe Families messages, and the third group did not receive any food safety education before preparing the meal.

The researchers set up a condominium on the K-State campus to reflect a home kitchen environment and videotaped the participants preparing a recipe using either raw ground beef or chicken and a ready-to-eat fruit salad. The raw meat was inoculated with Lactobacillus casei, a nonpathogenic organism commonly found in yogurt but not naturally present in meat.

The L. casei served as a tracer organism that allowed Randall Phebus, K-State food microbiologist and co-author of the study, to track the levels of meat-associated contamination spread throughout the kitchen while preparing these meals.

Phebus and his team of students found that more than 90 percent of the fruit salads prepared alongside the meat dish were contaminated with the tracer organism, suggesting that if the tracer represented a pathogen such as Salmonella, a high risk of foodborne illness was generated during the meal preparation.

The study found that all participants, regardless of food safety message group prior to the meal preparation, made mistakes in the kitchen that could lead to foodborne illness.

In addition to high levels of contamination in their cloth towels, about 82 percent of participants also left meat-originating contamination on the sink faucet, refrigerator, oven and trash container.

While the study paints a picture of the objects consumers often leave contaminated, it is important to note common mistakes that occur in the kitchen, which are often difficult to change.

"I think these days a lot of people learn on their own how to cook, so they may not know how to be conscious of cross contamination," Sneed said. "People are becoming more aware of the hazards in raw meat products, but they may not know how to prevent those hazards through things like separation or raw and ready-to-eat foods and sanitation. I think it's fairly easy to avoid cross contamination, but it's also easy to cause it."

5 Food Safety Mistakes in the Kitchen
A study was done to check food safety measures commonly practised at home by video recording food .....

Watson App from IBM Whips Up Big Data in the Kitchen
IBM and the magazine Bon Appetit has adorned a hat on its Watson supercomputer on Monday, to unveil ...

Kitchens: The 'Spot' for Mult-Drug Resistant Bacteria
Kitchens remain a source of multi-drug resistant bacteria as suggested by researchers....

Airy Kitchen Safe for Lungs: Study
Lungs will function better in a clean and ventilated kitchen, a new research has found...