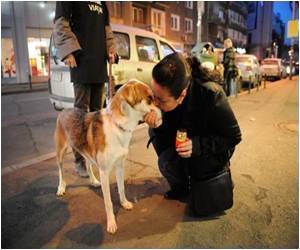 Gingivitis is a common gum disease caused by poor oral hygiene. It begins with plaque deposition around the gums and teeth.
Advertisement

They conducted analysis to find the presence of 11 disease-causing oral bacteria-called "periodontopathic" species-in the plaque.

Do you know how many canines or molar teeth you have and what is their function? Find out from this interactive calculator.
Advertisement
There were much smaller percentages of the same bacteria in the humans.

"The results," the researchers concluded, "suggest that several periodontopathic species could be transmitted between humans and their companion."

Dr. Ann Hohenhaus at the Animal Medical Center in Manhattan said the study doesn't prove conclusively that kissing dogs poses any danger and added, "Organisms are not uniform across the board."

But, said Honehaus, "the whole thing when people say animals' mouths are cleaner than ours doesn't make a whole lot of sense to me."

"Dogs have a lot of bacteria in their mouths," she said.

The study has been published in the Archives of Oral Biology.

Dogs may connect with humans more than any other animal, including homo sapiens themselves, a new study has suggested.
Advertisement
<< Japan Confident Medical Tourism Will Not be Hit by Current J...
Plastic Surgery for Minors to be Banned in Chinese City >>

Study Says Dogs may Protect Babies from Some Infections