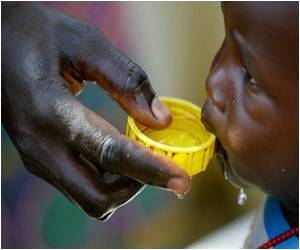 Pitiable hygiene and sanitation due to lack of water is lending to rising child mortality rates in the Pacific island nation of Kiribati, said a UN envoy.

UN special rapporteur on the right to water and sanitation Catarina de Albuquerque said urgent action was needed to address water shortages among the country's 100,000 population.

The World Bank has determined that climate change will be a serious barrier to growth in poorer nations and must be curbed now.
Advertisement

"I was shocked by the child mortality rate in Kiribati, which is the highest in the Pacific," she said in a statement issued during a three-day trip to inspect the situation first-hand.


"If the country seriously wants to reduce preventable deaths of children, sanitation and hygiene are two vital issues to be addressed as a matter of urgency," she said.
Advertisement
Kiribati, which consists of 32 coral atolls spread over 3.5 million square kilometres (1.35 million square miles) of ocean, has a child mortality rate more than twice the average for the East Asia/Pacific region, World Bank data shows.

De Albuquerque said a lack of proper sanitation facilities meant much of the population used the sea and bushes to go to the toilet, which, combined with a lack of hand-washing habits, led to the spread of disease among children.

"The current situation of water supply is unsustainable," she said, describing access to safe drinking water and adequate sanitation as basic human rights.

She said the Kiribati government needed to create a specialised department to deal with the issue and implement programmes to do things such as boosting the capacity to harvest rainwater and producing affordable water from desalination plants.

De Albuquerque also noted that the low-lying nation was struggling to deal with climate change and said rising sea levels had contaminated some sources of ground water.

She said the international community, particularly those countries most responsible for climate change, had an obligation to help Kiribati address its water issues.

Water Matters: Why You Need to Drink Enough Water Everyday
News Archive
News Resource
News Category
Why East African Newborns at Increased Birth Defects Risk? Healthy Ways to Get Your Baby Sleep Longer Classmates Sitting Next to Each Other More Likely to Become Friends Developmental Dyslexia Plays Major Role in Human Adaptation Is Headache in Kids a Consequence of Online Classes?
More News
Sign up for Wellness Consult a Doctor Sign up for Selfcare