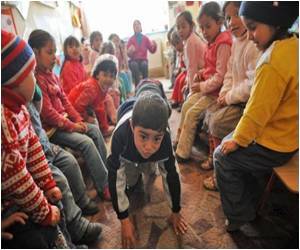 Kindergartners exclaim, 'Storks and swallows,' in this Transylvanian village when asked what birds arrive in springtime. They then proudly count to 20 ignorant of being part of an experiment to help Roma kids defeat a life mired in poverty.

The class might seem unremarkable but in Romania, one of the European Union's poorest members, early schooling is now seen as "an important step to fight the vicious circle of poverty-school-failure-poverty", Szilard Dullo, the director of the school in Araci, told AFP.

The idea is simple: poor children who attend kindergarten enter primary school better prepared, with the same skills as other youngsters, which reduces their chance of failing.


This central Romanian village was the first to try out the idea in 2010, developed by a non-governmental organisation, Ovidiu Rom, in partnership with the local community. It has seen kindergarten enrolment more than double in two years, from 89 children to 190 today.
Advertisement
Romania has the EU's highest rate of children 17 and under living in poverty -- almost 49 percent, according to figures published by the European statistical office Eurostat in February. This compares to 27 per cent in the EU as a whole, 29 percent in Britain and barely 14 percent in Finland.

"There are a lot of parallels between what happened in the US with the black Americans and what happens in Romania with the Roma", the US ambassador to Romania, Mark Gitenstein, told AFP citing the "devastating legacy of slavery".

Like blacks in the southern US, Romania's Roma were reduced to slavery and emancipated only in 1856. Many still live in dire poverty, as in Araci and the neighbouring hamlet Hetea where they occupy wooden shacks without running water or sanitation and often only a plastic sheet for roofing.

Typical are Costel, 5, and Abel, 6, who live with their two older brothers and father and mother, Aurica Koskodar, in a one-room hut she painted yellow inside and decorated with flower garlands to cheer up.

The youngsters sleep in the same bed and wash in a bucket of cold water their mother fetches at a nearby pump, sometimes waiting for an hour behind other families queuing for water.

Neither parent has a steady job and the family survives on social benefits, like 1,600 of the 4,000 people living in Araci and nearby villages.

"Twenty years ago, there was still a collective farm where lots of people worked but it closed down," said Denes Balazs, the village social worker.

"I'm happy," said Aurica, 30. "Since going to school, the boys are better behaved. They recite poetry. I hope they have a better life than ours."

A monetary incentive has helped the program, as has involving Roma parents, many of whom where forced to leave school early and remain illiterate.

A food coupon of about 12 euros a month ($15) is given to families living below the poverty level for each child who attends kindergarten daily -- a measure that has led to average 89 percent attendance records.

The expenses are covered by donations from corporations and private persons.

"You cannot build a house without foundations. As far as education is concerned, kindergarten is the foundation," said Maria Gheorghiu, a Romanian education specialist who founded Ovidiu Rom with American Leslie Hawke, the mother of actor Ethan Hawke, who came to Romania as a US Peace Corps volunteer in 2001 and stayed on.

"If all children get the same opportunity from the beginning, the chances to succeed in school will grow," Gheorghiu told AFP.

She and Hawke launched "Every kid in the kindergarten", as the program is called, in 2010 and have vowed to keep it going for 20 years to try to effect real social change.

"You need only 440 euros to maintain one child a whole year in the kindergarten," Hawke and Gheorghiu said.

Today, 1,400 poor children in 20 villages across the country take part in the program, which the founders hope can be implemented elsewhere.

In addition to special teacher training, Ovidiu Rom asks parents to attend a lesson and a school activity or meeting at least once a month.

"Some parents were afraid of school ...Now we have a better relation with them. They see what their children are doing and they come with ideas and proposals," said Dullo, who has taught in Araci for two decades.

Teacher Iuliana Pargaru agreed. "Before coming here, I was told by a colleague that Roma parents do not care about school, but on the contrary they do everything they can to help."

Roma children in Araci had a 50 percent failure rate prior to the program's start, but Dullo said fewer problems are already seen in elementary school.

"In the south of the United States where I come from, we also heard things like, 'blacks do not want to go to school'," but today we have an Afro-American president who went to Harvard," said Ambassador Gitenstein.

"I believe that one day there will a be a Roma president in Romania. It might take time but this can happen", he said.