Kim Jong-Il Treated by North Korean Medics Trained in US 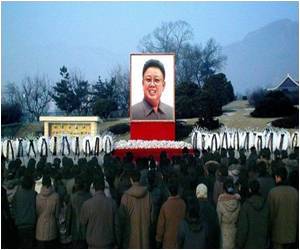 North Korean doctors, who treated former leader Kim Jong-Il after his stroke in 2008 were sent to the United States for training, said a South Korean doctor on Thursday.

Pyongyang's ambassador to the United Nations had asked the MD Anderson Cancer Center -- based in Houston and part of the University of Texas -- to train three North Korean doctors, Lee Byung-Hoon told AFP.

Stroke is a brain attack, which occurs when the blood supply to the brain is interrupted. It affects all age groups; according to the WHO, 15 million people are affected by stroke annually.
Advertisement

"The chief of the centre contacted the US government after being asked to secretly meet the North's ambassador, and got approval to accept them as exchange scholars," said Lee, an adviser to the Korean Medical Association.


He cited unidentified medics at the US centre for his information.

The communist North habitually lambasts the United States as "warmongers" and the "imperialist enemy."

Stroke can cause permanent disability and it is important to recognize its early warning signs to stop its progress. Early warning signs of stroke include sudden weakness of facial muscles.
Advertisement
One of the three specialised in diabetes, another in heart diseases and a third in strokes, Lee said. They trained for three months and the centre later accepted nine more doctors from the communist state.

"They are known to have been a part of Kim's personal medical team and US doctors who trained them came to be aware of details of Kim's medical condition," said Lee, adding their visits were funded by the US government.

The North also asked the US centre to send latest research papers on heart diseases a month before Kim died of a heart attack on December 17, Lee said.

"Apparently they knew Kim's heart condition was getting serious," he said, adding the US doctors did send the material.

Kim, who ruled the impoverished but nuclear-armed country for 17 years, suffered a stroke in August 2008 and is also thought to have had diabetes.

Stroke Outcomes Can be Improved Significantly by Simple Protocols

Stroke after care, which includes simple protocols to prevent fever, hyperglycemia, and aspiration pneumonia, can lead to profound differences in patients who survive stroke.
Advertisement
Advertisement
This site uses cookies to deliver our services.By using our site, you acknowledge that you have read and understand our Cookie Policy, Privacy Policy, and our Terms of Use  Ok, Got it. Close
×