Kids Who Feed Themselves Have No Increased Risk of Choking 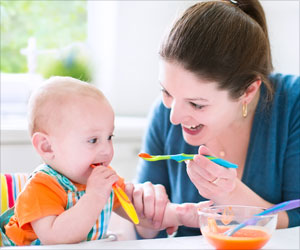 If your baby is suddenly unable to breathe, cry, cough, or speak, he may be choking. This happens if your baby's airways get partially blocked, and makes breathing or coughing difficult, but not impossible.

Choking is the result of a complete obstruction to the airway. The research was carried out by Dr Amy Brown, Associate Professor in Child Public Health, and maternal and infant health researcher.

Advertisement
‘Giving a baby solid foods when they are 6 months old is very different to giving it at 4 months old, as babies are not developmentally ready to sit up and swallow food until around this age.’

1151 mothers with a baby aged 4 - 12 months (solids are not recommended until 6 months of age, but some mothers introduce earlier) reported how they gave their baby solid foods, what foods they gave them and whether their baby had ever choked.


Overall no difference was found in how often their baby had ever choked amongst mothers who just allowed their baby to feed themselves family foods, used a mixture of spoon-feeding and letting their baby have finger foods, and those who mainly spoon fed their babies.
Advertisement
Dr Brown explained: "Following a baby-led weaning approach where you allow your baby to simply self-feed family foods, rather than preparing special pureed or mashed foods to spoon feed, has been growing in popularity over the last ten years in the UK and other countries. However some people have expressed concerns over whether this is safe, and might put babies at risk of choking."

"This study adds to previous research conducted in smaller sample groups that also showed this approach does not increase the risk of a baby choking, and indeed in the UK, supports the Department of Health recommendation that babies can have finger foods from six months old."

Babies used to be introduced to solid foods when they were much younger - at three months and then four months, but in 2002 changes were made to recommend solids were not given until 6 months, due to research showing waiting can reduce the risk of babies having certain illnesses, such as gastroenteritis. Giving a baby solid foods when they are 6 months old is very different to giving it at 4 months old, as babies are not developmentally ready to sit up and swallow food until around this age.

At 6 months they can sit up, pick up foods and put them in their mouths and chew, which removes the need for the spoon-feeding of soft foods. Some people worry that a baby feeding themselves might not be very skilled at doing so and as a result may not eat very much, but at 6 months milk should still form the major part of their diet as they get used to tastes and textures. The amount of energy needed from food is relatively small: around 250 calories a day until they are 9 months old.

There is no 'right' way to introduce a baby to solid foods - the most important part being that you let your baby go at their own pace and provide them with lots of different tastes and textures to experiment with. Many parents say that they enjoy using a baby-led approach as babies can join in mealtimes more easily, meaning parents can eat their own food at the same time. This way there is no need to spend time creating special meals and everything becomes more relaxed. Some parents also feel that their baby eats a wider variety of foods from an earlier age and enjoys their food more because they are more in control of eating.

This research from the Department of Public Health, Policy and Social Sciences adds to the growing body of evidence that suggests baby-led weaning does not pose a choking risk, as long as those foods known to be a choking risk to babies are avoided. Although babies are skilled at eating a wide variety of foods and can chew foods well even without teeth, parents should think about what food they are giving their children. They should think about what shape and size they are giving to their babies, and if in doubt talk to their health visitor. Children should not have whole nuts until five years old, and babies should not be given very hard foods that can snap into small bits in their mouth, such as raw apple slices and chunks of carrot. They should also not be given gelatinous foods like pieces of sausage, raw jelly cubes or sticky sweets.

The new study shows that there was a small increased risk of choking with very sticky foods such as thick chunks of bread that might get stuck, at least temporarily in the throat, or large chunks of very slippery foods which might accidentally slip in a baby's grasp and be swallowed whole, such as large hard chunks of melon and avocado, or very ripe banana. There was also a small increased risk when spoon-feeding very dry, lumpy purees that if given in too big a spoonful might get stuck in a baby's throat. Smaller, softer versions of these foods should not pose a problem. Regardless of their method of weaning, a caregiver should always stay with their baby throughout a meal.

The research is out now, entitled 'No difference in self-reported frequency of choking between infants introduced to solid foods using a baby-led weaning or traditional spoon-feeding approach', published by the Journal of Human Nutrition and Dietetics (JHND).

Source: Eurekalert
Advertisement
<< Guidelines for Breast Cancer Screening Not Being Followed
Discrimination Harms Yours as Well As Your Partner's Health >>

Falling Down, Choking Kills 4 Out of 5 Seniors in Old Age Homes
A reviews which reported the number of deaths in old age homes found that 15.2 percent, were from .....

Four-Year-Old Boy Rescued His School Friend from Choking
A four-year-old boy, Harvey Price, has been dubbed "an angel" after saving the life of a choking ......

US Man Charged for 'Choking' Woman Who Reclined Seat on a Flight
A California man has been charged with assault for allegedly punching and choking a woman after she ...