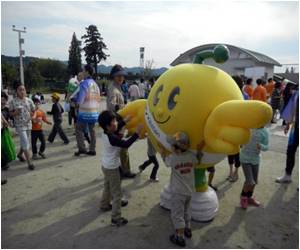 Around a million Dutch kids donned orange on Friday to celebrate national sports day and the official enthronement of their Dutch king.

The king-in-waiting and his Argentine wife, soon-to-be Queen Maxima, opened the "Koningsspelen" (King's Games) in the eastern city of Enschede. Around 1.3 million children are taking part in the national event -- including the royal couple's own three young daughters.

"We're now in the final countdown to April 30," Willem-Alexander, who turns 46 on Saturday, told the NOS national broadcaster four days ahead of his investiture as the first Dutch monarch in more than a century.


Now called the Prince of Orange, Willem-Alexander is to take over from his mother Queen Beatrix, 75, who will formally abdicate on Tuesday after which his own elaborate enthronement ceremony follows in the Dutch capital Amsterdam.
Advertisement
The royal couple, who are to become Europe's youngest king and queen, admitted that they were getting a bit nervous ahead of the day.

"It's creeping up a bit and you can feel it with the start of the King's Games," the Dutch future regent said.

The couple added that their own three daughters, heir to the throne Catherina-Amalia, 9, Alexia, 7, and Ariane, 6, were also participating in the King's Games.

"They will be taking part in diverse sports according to their age groups," Willem-Alexander said.

In an interview a few weeks ahead of the enthronement, Willem-Alexander said he wanted to be a "traditional king for the 21st century" but that he was not a "protocol fetishist".

Dutch Wants to Keep Soft Drugs for Locals
The Dutch cabinet proposed on Friday to turn the country's cannabis-vending coffee shops into ......