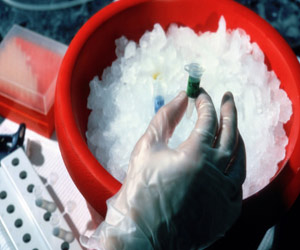 The key to a gene-silencing mechanism that serves as a major controller of cells' activities has been identified by scientists. The discovery could lead to a powerful new class of drugs against viral infections, cancers and other diseases.

"Learning to control natural gene silencing processes will allow an entirely new approach to treating human disease," said Ian J. MacRae, assistant professor in TSRI's Department of Integrative Structural and Computational Biology and principal investigator for the study, which appears as the cover story in the May 9, 2013 issue of the journal Molecular Cell.

A Scientific Mystery and Technical Conundrum

The gene-silencer in question is Argonaute 2, a molecular machine in cells that can grab and destroy the RNA transcripts of specific genes, preventing them from being translated into proteins. Argonaute 2 and other Argonaute proteins regulate the influence of about a third of the genes found in humans and other mammalsand thus are among the most important modulators of our cells' day-to-day activities. Argonautes' gene-silencing functions also help cells cope with rogue genetic activity from invading viruses or cancer-promoting DNA mutations.
Advertisement
Yet Argonautes' workings are complex and not yet entirely understood. For example, before it starts a search-and-destroy mission against a specific type of target RNA, an Argonaute 2 protein takes on board a target-recognition device: a short length of "guide RNA," also known as a microRNA (miRNA). The miRNA's sequence is mostly complementary to the target RNA'sa sort of chemical mirror-imageso that it can stick tightly to it.

But how do an Argonaute protein and its miRNA guide, having formed their partnership, manage to part company? It has been a scientific mystery and technical conundrum for researchers, who have found it hard to separate Argonaute proteins from miRNAs in the lab dish.

"That problem led us to look for a way to get Argonautes to unload these miRNAs," said Nabanita De, a postdoctoral fellow in MacRae's laboratory who was first author of the new study.

In an initial set of experiments, the team demonstrated that when an miRNA hooks up with an Argonaute 2, the pair do remain locked together and functioning for an exceptionally long time: days to weeks, whereas solo miRNA normally is degraded within minutes.

Yet prior studies by other laboratories have hinted at the existence of mechanisms that can hasten the separation of miRNAs from Argonautes. Some viruses, for example, produce decoy target RNAs that virtually nullify the activity of the corresponding miRNAs, seemingly by destabilizing the miRNA-Argonaute pairing. A key feature of these decoy target RNAs is that they make an almost perfect complementary match to the miRNAsespecially at one end of the miRNAs, known as the three-prime or 3' end. In this respect, they match the miRNAs much better than the natural gene transcripts that the miRNAs evolved to target.

Why do these matches and mismatches have such effects on the miRNA-Argonaute pairing? The mechanisms aren't obvious. But De noted that mismatches at the opposite end of miRNAs the 5' endhave the opposite effect. "Targets with 5'-end mismatches are actually better at unloading miRNAs from Argonaute," she said.

"The next thing we're trying to figure out is how all that works," said MacRae. "We have some guesses but no clear answer."

In a study reported last year, MacRae's laboratory used X-ray crystallography to determine the first high-resolution atomic structure of an Argonaute 2-miRNA complex. Now the team is working on a structural study of the complex as it grabs a target RNA. "When we can see the structural details of that interaction, then I think we'll have a much better handle on this loading and unloading process," said MacRae.

Scientists already have begun developing gene-silencing drugs that work like miRNAs; they are taken up by Argonaute proteins as guide RNAs and lead to the silencing of targeted gene transcripts. Pharmaceutical companies also are developing drugs that bind directly to miRNAs to inhibit their activity. The findings here suggest a new and, in principle, more powerful class of miRNA inhibitors/enhancers, aimed at destabilizing or stabilizing the miRNA-Argonaute complex.

"I can think of many applications for these," said MacRae. "One of the most obvious would be against hepatitis C virus, which requires a certain miRNA in liver cells for efficient replication; an RNA-based drug that speeds up the unloading of this virus-enhancing miRNA would be a powerful approach for shutting down the virus."

A better understanding of the miRNA loading and unloading process also should lead to better miRNA-type drugs, he added.