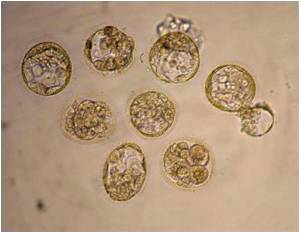 Pigs represent an effective proxy species to research treatments for humans, a team of American and Chinese scientists studying the role of stem cells in repairing damaged retina tissue have found.

The study, published in STEM CELLS, demonstrates how stem cells can be isolated and transplanted between pigs, overcoming a key barrier to the research.

Treatments to repair the human retina following degenerative diseases remain a challenge for medical science. Unlike species of lower vertebrates the human retina lacks a regenerative pathway meaning that research has focused on cell transplantation.


"The retina is the light sensitive tissue surrounding the inner surface of the eye. Its outer layer is made up of rods and cone photoreceptor cells which convert light signals," said lead author Douglas Dean from the University of Louisville. "Traditionally transplant studies have focused on mice and other rodents because of the variety of genetic material they represent, however mouse retina tissue is rod dominant, which is significantly different to the human eye."

"Studies into swine models have been hampered in the past," said Dean, "because the induced pluripotent stem cells (iPSCs) needed for such transplants have not been isolated from pigs, while their compatibility with a host's photoreceptor cells had not been demonstrated."

Dr Dean's team gathered iPSCs from swine skin fibroblasts and demonstrated that these cells differentiated in culture and could be integrated with the cells of a second pig's retina.

While only a small section of the retina was transplanted for this study the results could open a new avenue of research into degenerative conditions as researchers have a more effective human proxy species to work with. "Our results demonstrate that swine stem cells can be integrated into a damaged swine neural retina," concluded Dean. "This research now lays a foundation for future studies of retinal stem cell transplantation in a swine model."

Chronic Lymphocytic Leukemia (CLL) is one of the most common types of adult leukemia and is considered as one of the 'good cancers'.
Advertisement
<< Increased Inequality in Stroke Deaths Across Europe and Cen...
New Strategy to Reduce Catheter Blockage Detailed >>